Paddy Jackson paints a picture of ‘the happiest man in Belfast’ 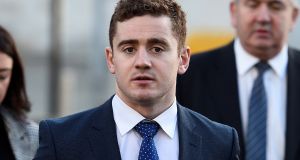 Paddy Jackson: the Ulster and Ireland rugby player was originally due to give evidence last week but snow, and a sick juror, delayed proceedings. Photograph: Clodagh Kilcoyne/Reuters/File photo

Paddy Jackson claims he was “the happiest man in Belfast” on June 27th, 2016. The rugby star had just returned from an international tour with the Irish team where he played a part in a rare win against South Africa.

Although Ireland failed to win the series, Jackson was, by his own account, “in great form” and “unbelievably happy”.

He was happy with his own performance and he now had four weeks off which he was going to spend catching up with his friends.

He was especially looking forward to seeing Blane McIlroy, who he had grown up with but hadn’t seen for a long time due to McIlroy’s studies in the US.

Being a professional rugby player is a high-pressure job and being away on tour is especially tough, Jackson said. But he forged close friendships in the game.

He has known Stuart Olding since they met in the Ulster Rugby Academy which coaches talented young players.

On the Irish team, he’s very close with Ian Henderson and team captain Rory Best, despite Best being a bit older than him. “I’m very close to him and have learned a lot from him over the years,” Jackson said.

He even babysat for Best’s kids and was invited to one of their birthday parties.

This is the picture Jackson painted when he took the stand during the sixth week of his trial for the alleged rape of a Belfast student. He was originally due to give evidence last week but snow, and a sick juror, delayed proceedings.

Defence counsel Brendan Kelly took Jackson through his hobbies. These include sketching and drawing (particularly his dog and superheroes) and miming to rap songs (a “silly” pastime, although he agreed one of his YouTube videos had more than a million views). Jackson also mentioned his charity work with Mencap and Action Cancer.

Giving evidence about the night of the alleged rape, Jackson repeated what he told police; he had consensual oral sex with the woman and she did not appear distressed at any point.

The woman seemed to like him and he liked her. When they kissed, she bit his lip. This caused him some pain but he didn’t mind; a detail that drew some stifled giggles from the court’s public gallery.

Two days later, after two nights on the town, Jackson’s good mood evaporated when then Ulster Rugby director Les Kiss rang him and told him to get to the police station. There Jackson was “shocked” to learn he had been accused of rape, he said.

Prosecution counsel Toby Hedworth QC put it to Jackson he wasn’t “shocked” at the police station, he was just realising he hadn’t “gotten away with it” after all.

Counsel also called it “a blatant lie” that Jackson’s friends had failed to tell him the alleged victim was saying she was raped in the hours after the incident. Jackson said his friends probably didn’t tell him because they didn’t want him to worry.

If he had known the woman was alleging rape he would have gone to the police, hired a solicitor and tried to find out more information. Instead, he said, he went out drinking for two days.