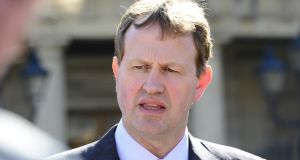 Jim O’Callaghan called for a “swift” response from the Minister for Justice and Equality. Photograph: Cyril Byrne

The Policing Authority has said it will study the “significant findings and recommendations” of the Public Accounts Committee’s report into the management of the Garda training college when it next meets later this month.

In a statement after the committee published its report on the training college the authority, an independent body set up to oversee the performance of An Garda Síochána, said it was already reviewing aspects of the corporate governance in the force.

The authority said that at the July 27th meeting, it would also be “assessing the implementation by the Garda Síochána of its internal audit reports on these matters” as part of its preparation for reporting to the Minister for Justice in the coming weeks.

“The recommendations in the committee’s report in relation to structures and governance of the Garda Síochána are very timely and will be of relevance to that work,” it said.

Fianna Fáil’s justice spokesman Jim O’Callaghan called for a “swift” response from the Minister for Justice Charlie Flanagan to the findings about his department’s oversight of the force.

He also said that Mr Flanagan needs to commence an immediate review of the oversight role played by his department in relation to An Garda Síochána.

Fianna Fáil said its position on Ms O’Sullivan’s future had not changed and it would not be pressing forward with any motion of no confidence when the Dáil resumes.

Shortly before the publication of the report, Taoiseach Leo Varadkar said: “I remain fully confident in the Garda Commissioner.”

Social Democrats TD Catherine Murphy said she welcomed that the report did “not pull any punches”.

“From the outset of this investigation, it was characterised by the [Garda] Commissioner as an ‘interpersonal dispute’ between staff members when in fact the committee found it was a ‘profound professional disagreement among senior management’. There is quite a significant difference in the two,” she said.

Labour TD Alan Kelly has said the report’s conclusions show that the position of the Commissioner, Nóirín O’Sullivan, was untenable and he called on her to resign.

Mr Kelly, who is also PAC vice-chairman, said the evidence presented shows that she knew of issues at the college on or before July 2015 and her failure to inform the C&AG until 10 months later.