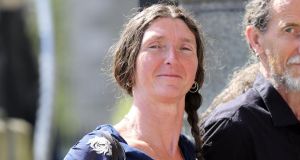 A High Court judge has overturned an order for demolition of a family home erected without planning permission near Lough Dan in Co Wicklow.

Katie Fortune and her two children have lived since 1999 in a chalet on lands at Carrigeenshinnagh, Lough Dan, Roundwood, Co Wicklow and she brought an action challenging a decision of Wicklow Circuit Court requiring the structure be demolished or removed.

That order was made after the Circuit Court agreed with Wicklow County Council the structure, in which the family have lived since 1999, was an unauthorised development without planning permission.

In his judgment yesterday, Mr Justice Gerard Hogan said he was refusing a demolition order because the council had failed to produce any compelling evidence the dwelling was completely at odds with important public policy objectives.

The judge, who previously ruled the dwelling was an unauthorised development, said it was “plain” the chalet did not jeopardise or threaten the rights of others.

Although located in “an outstanding area of natural beauty”, the chalet was “entirely hidden away from view,” and did not “detract from any of the great vistas which are one of the glories of the Wicklow uplands”, he said.

Any order to demolish the chalet represented “a drastic interference” with Ms Fortune’s property rights, he said.

The judge ordered Ms Fortune to operate the effluent system outside the dwelling in a manner compatible with existing EPA guidelines.

The council initiated proceedings in 2009 against Ms Fortune and her brother Johnny under Section 160 of the Planning and Development Act 2000. Wicklow Circuit Court in 2011 granted various orders requiring them to demolish and cease occupation of the chalet and other structures on the lands, including a mobile home, chicken coop and caravan.

In the High Court, Ms Fortune argued demolition would compromise the guarantee under Article 40.5 of the Constitution of inviolability of her home.

The Council claimed failure to demolish the structure would undermine protection of the environment and reward Ms Fortune for having built an unauthorised development. Refusal of a demolition order could set a precedent and compromise the Wicklow Mountains as a special area of conservation, it argued.

In his ruling, Mr Justice Hogan said the fact he had found the structure to be unauthorised should act as a deterrent to “those who might take the law into their own hands”. He did not accept allowing the dwelling remain would set a precedent.

He also said there was no compelling evidence advanced to show the dwelling compromised the protection of the site.

While the council had advanced arguments that were “important and weighty”, the court could not ignore the wording of Article 40.5 which ensures a private dwelling be safeguarded in an extensive manner as befits a free and democratic society, he said.

The proceedings in relation to the other structures on the site, which are also claimed to lack planning permission, will be dealt with later.