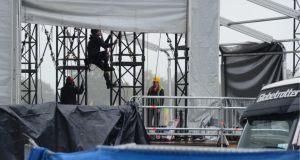 Approximately 100 residents living in the vicinity of the Phoenix Park attended a meeting to discuss a controversial concert due to take place this summer and will submit objections to its licensing application.

Fears over the potential conduct of revellers at this July’s triple concert run comes following problems surrounding the Swedish House Mafia gig at the same venue last summer. Last night, residents from the Infirmary Road, the North Circular Road, Blackhorse Avenue, the Navan Road and Castleknock vented anger over the previous event and its physical effects on the park itself.

The meeting at the Ashtown Visitor Centre was attended by park superintendent Margaret Gormley as well as officials from Dublin City Council, the Office of Public Works and gardai.

“The OPW came in for a lot of criticism as custodians of the Phoenix Park for issuing an invitation to promoters to host concerts in the park,” said Cllr Mary Fitzpatrick.

“A lot of people are very angry. As someone from the area and as chair of the joint policing committee I will be holding the city manager to account in terms of the policing, cleaning and traffic management.” The licence application for the three 40,000 capacity events has been filed by Festival Republic on behalf of MCD.

Covid-19: Almost 500,000 vaccine doses to have been administered ‘by end of next week’ 16:46
Clashes in Dublin as hundreds protest against Covid-19 restrictions 16:42
‘It destroyed me’: Maria Bailey on ‘swing gate’ controversy 16:10
Electrical waste recycling drops in January after rise in 2020 15:57
Construction sector ‘spin’ must be challenged, Soc Dems conference told 15:08