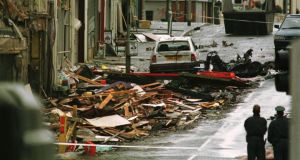 Séamus Daly (44) is accused of murdering 29 people in the Omagh bombing. Photograph: The Irish Times

Lawyers for a bricklayer accused of murdering 29 people in the Omagh bombing have been given a month to decide whether to cross-examine witnesses in a legal attempt to stop him facing trial.

Séamus Daly (44) is on remand in prison in Northern Ireland charged with the 1998 Real IRA attack in the Co Tyrone market town.

He appeared before Omagh Magistrates’ Court by video-link in the latest of a series of pre-trial hearings since his arrest last April.

Relatives of a number of the victims watched from the public gallery of the courtroom as Daly, from Kilnasaggart Road, Jonesborough, Co Armagh, observed proceedings on a screen inside Maghaberry high-security prison.

He said senior defence counsel Michael O’Higgins will assess the documents to decide whether the evidence should be tested orally in the magistrates’ court before a decision is made to commit his client to Crown Court trial.

The process of assessing evidence to determine if it is of sufficient strength to warrant trial can either be done by a magistrate solely by considering the relevant papers and witness statements in the case – a preliminary inquiry – or by more extensive procedures where witnesses are called and cross-examined – a preliminary investigation or mixed committal.

Mr Corrigan told the judge that Mr O’Higgins would make the decision on whether a preliminary investigation would be requested.

“He will give it his urgent attention,” he said.

Ms Kelly adjourned the case until September 15th to give Mr O’Higgins time to consider the prosecution papers.

Mr Corrigan added: “We will be dealing with this expeditiously.”

As well as the 29 murder counts, Mr Daly faces charges of causing the August 1998 explosion and possession of a bomb in the market town with intent to endanger life or property.

He is further charged with conspiring to cause an explosion and having explosives with intent in connection with a separate dissident republican bomb plot in Lisburn, Co Antrim, in April that year.

Bereaved relatives Michael Gallagher, Cat Gallagher-Wilkinson and Stanley McComb were among those who attended the short hearing.