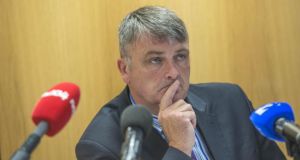 Simon O’Brien, Chairman Garda Síochána Ombudsman Commission (GSOC). An Oireachtas Justice, Equality and Defence committee has outlined its vision for the proposed Garda Authority, and recommended sweeping reforms of the Garda, the GSOC and the Garda Inspectorate Photograph: Brenda Fitzsimons / The Irish Times

A report by the Oireachtas Justice, Equality and Defence committee has outlined its vision for the proposed Garda Authority, and recommended sweeping reforms of the Garda, the Garda Síochána Ombudsman Commission (GSOC) and the Garda Inspectorate following damaging revelations of garda malpractice over the past two years.

The report is the culmination of the committee’s review of the Garda Síochána Act 2005, which was carried out after it emerged senior gardaí were involved in the wiping of penalty points for individuals, and amid allegations of a “shared culture of secrecy” with the Department of Justice.

The committee recommends changing the structure of the GSOC, so that instead of three commissioners, there is a single Garda Síochána Ombudsman (GSO). This would ensure “a greater degree of accountability” and that there is no possibility of divergence in findings, the report said.

It also recommends that the Garda Commissioner be accountable to the ombudsman, and that the GSO have powers to conduct investigations on his own initiative. This would encourage the Garda “to maintain more effective practices and eliminate cultures which impede this”.

In terms of the complaints and investigations process, the committee recommends that any citizen should be entitled to raise concerns without fear of reproach, and suggests the formulation of guidelines for dealing with complaints from members of the force. It also recommends access to the PULSE system by the GSO be given on a statutory footing.

The committee said resources should be provided to put in place measures that aim to prevent the development of any systemic problems or negative cultures within the force, as this may reduce the level of complaints.

Presently, it is an offence to provide information that is “false or misleading” to the GSOC. The report calls for an amendment to ensure no sanction, criminal or otherwise, should apply where it is shown that no malice was intended when making a complaint.

The committee also recommends expansion of the Garda Inspectorate to allow for the formation of a Criminal Justice Inspectorate to oversee and supervise the administration of all aspects of the criminal justice system.

The committee also recommends the removal of protocol requiring advance notice of inspections, thus allowing for “cold calling” or “on the spot inspections”. The possibility of unplanned visits could “greatly enhance” the operational effectiveness of the Garda.

It recommends the selection of nominees to the Garda Authority be the responsibility of the Public Appointments Service, with their consideration and appointment reserved for the minister and government.

The minister would have the final decision on each appointment following his or her consideration and may further scrutinise or veto the appointment.

The appointment of senior officers would be the responsibility of the Garda Authority as this would “minimise the scope for political interference and ensure an equally effective scrutiny of applicants for senior positions” from the rank of Chief Superintendent upwards.