No prosecution over three Troubles killings, including child - North’s PPS 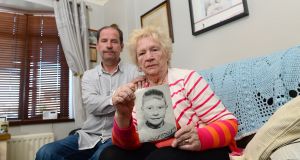 The North’s Public Prosecution Service (PPS) has decided not to pursue prosecutions in relation to three historic Troubles killings, including that of the first child to be killed in the conflict, nine-year-old Patrick Rooney.

The PPS had considered files about the August 15th 1969 killings of Patrick Rooney, Hugh McCabe (20) and Samuel McLarnon (28) who were shot dead allegedly by Royal Ulster Constabulary (RUC) officers in three separate incidents in the Ardoyne and Divis areas of Belfast.

But almost 51 years since the killings the PPS on Thursday announced that no one is to be prosecuted.

Con Rooney, brother of Patrick, said the family which includes his mother Alice were “very disappointed” at the decision.

“The police had no reason to open fire. As far as we are concerned the officer who killed Patrick has got away with murder,” he said.

Mr Rooney said the family now planned to take a civil case against the PSNI over his brother’s killing.

The PPS’s assistant director Lynne Carlin said that a “team of experienced prosecutors has completed a careful consideration of all evidence reported in connection with three tragic deaths which happened during the widespread disorder of August 1969”.

“In two of these cases, those relating to the deaths of Hugh McCabe and Patrick Rooney, it was concluded that there is no reasonable prospect of conviction for any offence in respect of the two former RUC officers reported,” she said.

“In the case of Samuel McLarnon, a review of the available evidence confirmed that the only identifiable suspect is now deceased,” she said.

She said that the decisions were taken following an independent and impartial application of the test for prosecution and with the assistance of advice from senior counsel.

“In none of the cases did the available evidence provide a reasonable prospect of conviction of any identified suspect for a criminal offence,” said Ms Carlin.

“I fully acknowledge the deep disappointment felt today by three families who have lived for many decades with the loss of their loved one in very painful circumstances.”

The cases had been referred to the PPS by the Police Ombudsman’s office following investigations by the former Historical Enquiries Team within the PSNI.

The killing of Patrick Rooney is the first story in Joe Duffy and Irish Times Northern Correspondent Freya McClement’s book, Children of the Troubles and the sixth death of the Troubles recorded in the book Lost Lives. He was struck by a bullet as he lay in his bed in his family’s flat in Divis Tower in west Belfast.

One former RUC officer was considered for the child’s killing. He was alleged to have been the gunner in one of three Shorland vehicles being operated by the RUC in the area of the Rooney home at the time. Two of the three gunners from the Shorland vehicles are now deceased.

The PPS found that there was “no evidence that would allow the prosecution to establish which of the three gunners fired the fatal shot” and neither could it be established that the surviving officer was part of a “joint enterprise” with either of the other two gunners.

In relation to the death of Hugh McCabe, who was shot at the Whitehall Maisonettes in Divis Street in west Belfast the PPS detailed how there was evidence of two officers firing from the roof of Hastings Street RUC station. While a surviving officer was considered in the case the “reported suspect” was the deceased officer.

Samuel McLarnon was shot in the living room of his house in the Ardoyne area of north Belfast. The PPS said the “only identified suspect is now deceased”.

The victims group Relatives For Justice criticised the decision. “The news that due to passage of time there will be no prosecutions in the killings of three civilians by the RUC in 1969 is the price of justice delayed — it truly is justice denied,” it said in a statement.

“Today’s shame should motivate all actors, especially the British government, to move immediately and implement human rights-compliant mechanisms to deal with the past so no more families face this appalling vista,” it added.

1 ‘It was pitch black’ - Rescued teenager describes night afloat with her cousin in Galway Bay
2 Inside the O’Brien Fine Foods factory in lockdown Kildare
3 A million trees, including 400,000 oaks, to be destroyed this week
4 Schools urged not to demand clean uniforms each day
5 Garda killer Aaron Brady will be almost 60 by time he leaves prison
Real news has value SUBSCRIBE