Jail terms of up to 10 years for encouraging, recruiting or training others to engage in terrorism 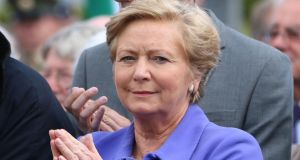 Minister for Justice Frances Fitzgerald said publication of the legislation was an important milestone towards the transposition of the EU Framework Decision on combating terrorism.

New anti-terrorist legislation to bring EU rules into effect in Ireland was published today by Minister for Justice Frances Fitzgerald.

The Bill creates three new offences, public provocation to commit a terrorist offence, recruitment for terrorism and training for terrorism.

These offences will carry sentences of up to 10 years imprisonment.

“The publication of this Bill is an important milestone towards the enactment of this legislation and the transposition of the EU Framework Decision on combating terrorism,” said Ms Fitzgerald.

She said it also laid the groundwork for Ireland’s ratification of the Council of Europe Convention on the Prevention of Terrorism which would take place in due course. “We stand with our European colleagues in doing everything in our power to ensure that there are no gaps in our law that can be exploited by those who would inflict terror and mayhem on innocent people at home or abroad,” said the Minister.

“There can be no hiding place in democratic society for those who encourage, recruit or train others to carry out acts of terrorism and we must never relent in our determination to use all resources at our disposal to root them out.”

The EU council decision was agreed in Brussels almost six years ago on November 26th, 2008.

The three new offences were designed to reflect similar offences covered by the Council of Europe Convention on the Prevention of Terrorism, which Ireland signed on October 3rd, 008.

The offence of “public provocation to commit a terrorist offence” is committed when a person distributes or otherwise makes available by whatever means of communication, a message to the public, with the intention of encouraging, directly or indirectly, the commission of a terrorist activity.

A person convicted of this offence is liable on conviction on indictment to a fine or imprisonment for up to 10 years, or both. The offence of “training for terrorism” is committed where a person provides instruction or training in the skills of making or using firearms or explosives, nuclear material, biological, chemical or prohibited weapons or such other weapons or noxious or hazardous substances as the Minister may prescribe, knowing that the skills provided are intended to be used for the purpose of terrorist activity.

The offence also covers training in techniques or methods for use in terrorist activity. A person convicted of this offence is liable on conviction on indictment to a fine or imprisonment for up to 10 years, or both.