New 12-year minimum sentence for murder to be set 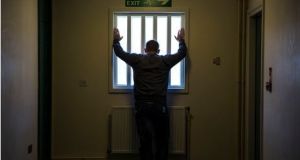 The vast majority of the approximately 350 life-sentence prisoners in Ireland are there for murder, and can only be released by the Minister for Justice on the advice of the Parole Board. File photograph: Getty Images

The Government is to set a new effective minimum sentence of 12 years for murder as part of its plan to reform the parole system.

The 12-year provision is contained in an opposition Bill which has been accepted by the Government.

Minister for Justice Charlie Flanagan indicated on Thursday the Cabinet has accepted the main provisions of the Bill and given him permission to advance it.

The vast majority of the approximately 350 life-sentence prisoners in Ireland are there for murder, and can only be released by the Minister for Justice on the advice of the Parole Board.

Under the current system, a life-sentence prisoner must serve a minimum of seven years before being considered by the board. The Parole Bill will see this rise to 12 years, Mr Flanagan told the Parole Board’s annual conference.

Although prisoners are first reviewed after seven years, in practise they are never released at this stage and often have to go through many reviews before release. Currently the average life sentence lasts 22 years.

The shortest term for murder in recent years was served by Stephen Doyle, who spent 13 1/3 years inside. The board released Mr Doyle because of his efforts at reform, including setting up an organisation while in prison to assist ex-inmates.

There have been concerns the new increased minimum term could cause an increase in the overall period that life-sentence prisoners spend inside, as the board might be reluctant to release a prisoner after their first or second review, even if they are eligible.

“The interpretation of the proposed increase in minimum term by decision-makers is crucial in terms of its potential impact on time served,” the Irish Penal Reform Trust said in its submission to Government.

“Is the 12-year minimum term to operate as the default point at which a life sentence prisoner is to be released? Alternatively, will the current process of multiple reviews continue?”

This concern is shared by members of the Parole Board, who have asked the Minister to allow it to continue to meet prisoners at the seven-year mark to put in place a sentence management plan. This would give prisoners a better chance of release when the 12-year minimum expires.

“Preparing prisoners for their release from prison is an important step and it should be encouraged. There has to be a management plan on how prisoners are going to be integrated into the community,” he told The Irish Times.

Mr O’Callaghan also welcomed the acceptance of the other major components of the Bill, including placing the Parole Board on a statutory footing for the first time and placing the final decision with the board and not the Minister for Justice.

Coronavirus: 13 further deaths and 456 new cases reported in the State 17:46
Garda seriously injured in hit-and-run on M1 motorway 17:35
Women ‘left in poverty’ due to welfare system built around ‘male breadwinner’ 16:47
Man and woman arrested after gardaí find €53,000 worth of drugs 16:26
Warning issued for fog and freezing fog across the State 16:21