Much remains unclear but Dundalk attack has ‘the hallmarks’ of terror 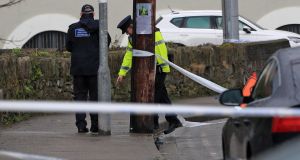 Security sources caution against reading too much, too early into the Dundalk attacks, but all agreed that it falls into a well-worn pattern, whatever the motivation of the 18-year-old attacker.

“It has the hallmarks [of a terror attack],” said one source, “You have a lone actor, using low-tech weapons, a young man, that part of the world etc etc, but nothing confirmed and no one seems to know the guy.”

Much still remains unclear. However, the difference between a mentally-ill attacker and one who is politically or religiously motivated is irrelevant to the victims and the family of the dead man.

“It fits the wider European pattern by the look of it,” said one source, “which would suggest terrorism – a disenchanted young Muslim man, no sense of former issues with mental health or criminality.”

It is suggested that the young Egyptian applied for, but was refused, asylum status in the United Kingdom and then came to Ireland – possibly days, or even just hours before the attacks began in the Co Louth town.

On January 1st, he was stopped in Dundalk by a garda and asked about his status in the country. When he failed to produce proper papers he was instructed to go to Dublin to apply for asylum.

Failed asylum seekers in the UK are not routinely held in custody if their applications, or appeal against refusal to stay, fails. Some voluntarily depart, while others have to be deported forcibly.

According to the UK Refugee Council, a person whose application for asylum has failed but whose appeal has yet to be heard will not normally be detained, but will be asked to report regularly to the Home Office.

The council says that in 2016, 4,117 refused asylum seekers and dependants left the UK, and more than 40 per cent of these were voluntary departures.

Discerning why the Dundalk attack happened will determine what the authorities do next. It is more difficult to fend off random acts of madness than it is to stand against a calculated act of terror, inspired by politico-religious motives seeking to inflict mass casualties.

The former can happen anywhere and at any time. The latter will tend to happen in crowded places, such as a sporting or cultural event, or in shopping centres, or an open air market. If a terror attack, the fact that it occurred outside Dublin did not surprise.

“We are dealing with a statistical inevitability where these basic style of attacks are concerned, so I’m sure that will be highlighted and the unstable nature of the participant,” a security source said.

“We are still at an early stage,” said another source, “but most importantly, many people will be shocked that being Irish, or living in Ireland, didn’t prevent someone having issues, for whatever reason, or reasons.”

5 Abbeyfeale: ‘People will tell you the town is f***ed’