Mother contacts every Clare hotel in search of missing son

Sean Ryan was last seen near the Cliffs of Moher in September, 1998 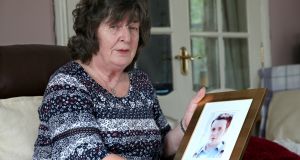 Patricia Douglas with a photograph of her son, Sean, who went missing in Co Clare in 1998. Photograph: Stephen Davison

A mother, whose 17-year-old son went missing close to the Cliffs of Moher almost 21 years ago, has in recent weeks been contacting every hotel in Co Clare in a bid to find him.

Co Down woman Patricia Douglas last saw her son, Sean Ryan, on August 31st, 1998, when he left their family home in Downpatrick.

Despite his disappearance close to a noted suicide spot, Ms Douglas says she cannot give up hope of finding him and has travelled to Co Clare in search of him on numerous occasions over the past two decades.

Using current images of Sean’s two brothers, Ms Douglas has produced a digitally aged photograph of Sean and has contacted each of Clare’s 38 hotels with a poster and personal letter seeking their help.

Sean had worked in the hotel industry in Co Down and she believes someone working in a Clare hotel may have information about him.

While she is aware of the large number of suicides which take place at the Cliffs of Moher each year, Ms Douglas says she cannot stop looking for her son.

“I still have hope. I do. You can still survive with cash in hand very easily, without leaving a regular record of work. Sean was quite independent and he could easily find work like that,” she said.

“I know that [people take their own lives] at the Cliffs of Moher. They did a search along the shore and they found nothing and no other trace has ever turned up. So all I can think is maybe he is still alive. I’ve got no answers. I’ve no closure.

“I have completed a number of posters that I have laminated and sent to all the hotels in Clare. I’ve written them all a letter and I’ve asked that they put it in the kitchen or on their noticeboard somewhere. Someone might have come across him.

Mr Ryan was identified on three occasions in early September of 1998, once by a relative in Galway and twice close to the Cliffs of Moher.

He was positively identified by a local Clare fisherman who gave him a lift from Doolin to Lahinch and again by a member of an Garda Síochána close to the Cliffs of Moher.

An extensive sea and coastline search was carried out in the area following his disappearance but no trace of him was ever discovered.

“I miss him terribly and travel to Clare as often as I can in the hope of seeing him. I was down in Clare for five days [last month] and stayed in Ballyvaughan. I met up with a man who lives out in Fanore. He has a brother who went missing in Mullingar two years ago and he has been helping me.”

Last month, a Coroner Court in Ennis heard that eight or nine bodies have never been recovered off the Cliffs of Moher over the past 23 years. During that inquest, Max Tienert of Mountshannon in east Clare was formally pronounced dead, despite no remains being discovered.

Clare County Coroner Isobel O’Dea required special permission from the Attorney General’s office to hold the inquest when no body was recovered.

Anyone with any information about Sean is asked to contact Patricia Douglas or missing.ie on pat_ryan50@hotmail.com or info@missing.ie. Born on June 29th, 1981, he was last seen in the Doolin and Lahinch area in early September, 1998. He is five foot eight inches tall (1.7m) with brown hair, hazel eyes and is described as being quietly spoken