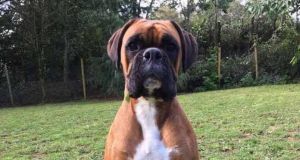 Michael McCoy’s daughter Rachel has said a dog of his called Fia (above) has been missing since his death and the family is offering a cash reward for information helping to find her.

A dog belonging to Michael McCoy, who died after he was attacked in the Dublin Mountains, stayed faithfully with him until rescue teams arrived in the early hours of the morning.

Mr McCoy’s family is continuing to search for a second dog that was him when he went walking in the woods on Thursday of last week.

The 63-year-old, a passionate conservationist, sustained fatal injuries during an assault. His body was found by a search team on a forest track in a wooded area at Ballinascorney Hill near Brittas last Friday at about 4am.

She said her father’s other dog, Fia, has been missing since and the family is offering a cash reward for information helping to find her.

She said the two-year-old brown boxer, who has a distinctive long tail, was last seen in Ballinascorney woods.

A 41-year-old man, the chief suspect, was released on Monday after gardaí arrested him on Saturday in connection with Mr McCoy’s death.

Gardaí said a file was being prepared for the Director of Public Prosecutions.

Mr McCoy was a leading member of the Dublin Mountain Conservation Group.

He had raised a large number of objections to developments in the Dublin Mountains and had come into conflict with a number of people because of the objections.

Gardaí believe his murder is linked to one of the campaigns he was involved in.

Mr McCoy’s funeral will take place in St Maelruain’s Church, Tallaght on Saturday and he will be buried in the adjoining cemetery.

The family have asked if anyone has information on Fia the dog to contact a local vet or gardaí in Tallaght, or to email lost@dspca.ie.

1 Covid-19: Travel restrictions to stay and 'green list' put on hold amid fears of second wave
2 Taoiseach ‘disappointed’ he only learned of Barry Cowen’s driving ban on Friday
3 Ireland should get ‘epidemic under control’ before looking at foreign travel
4 Bobby Storey: The IRA's planner and enforcer who stayed in the shadows
5 ‘Unseasonably’ windy weather set to buffet Ireland
Real news has value SUBSCRIBE