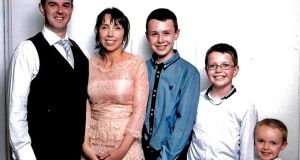 Family handout photo of (left to right) Alan Hawe with his wife Clodagh and their children Liam (13), Niall (11) and Ryan (6), who died in a suspected murder-suicide at their countryside house in Co Cavan. Photograph: Hawes/Coll families/PA Wire

The media’s reporting of the murder-suicide that claimed the lives of the Hawe family has been worrying and the authorities need to review all similar cases over the last decade to gain better understanding, the National Suicide Research Foundation has said.

Prof Ella Arensman, the foundation’s director of research, said it was only when a 10-year in-depth study was carried out that Ireland would begin to tackle the murder-suicide phenomenon. “We [must] go back through the cases and do a proper systematic investigation,” she said. “I don’t think anybody is helped by more [media] reporting,” she said of the Hawe family murder-suicide.

Asked whether some of the media’s report had been too graphic, Prof Arensman said: “Very much. I have seen media reports where I’ve been very, very concerned.”

She was concerned at reports outlining the manner of the deaths of each member of the family, saying such detail could lead to copycat attacks.

“There needs to be a more concerted effort, not only by the media, but by other people working in the community because a lot of those details should not have been in the newspapers at all,” she said of the deaths and background information on the family.

She had seen “speculation and inaccurate information” that was unhelpful. The media and others needed to be mindful of their “ethical obligation”.

The call for better research in order that each case became a learning opportunity was made as the local community in Co Cavan prepares for the funeral of the Hawes.

Ms Hawe, her husband Alan Hawe and sons Liam (13), Niall (11) and Ryan (6) will repose at Finnegan’s funeral home in Cavan town between 3pm and 8pm today. Fr Felim Kelly, curate in the parish of Castlerahan and Munterconnaught, will celebrate Requiem Mass tomorrow at 4pm in St Mary’s Church, Castlerahan.

The Hawes will be buried after the Mass in the cemetery beside the church.

The bodies were found by gardaí at the family home at Oakdene, Barconey near Ballyjamesduff, Co Cavan, late on Monday morning. The Garda has established that Mr Hawe murdered Ms Hawe and their three sons before taking his own life.

The extended families of the couple have asked for mourners who wish to make donations to give money to Pieta House, the mental health charity which runs eight centres across the country.

The National Suicide Research Foundation yesterday issued a briefing document on murder-suicide in the hope it would inform and bring more caution to the media’s reporting of such cases .

If you or someone you know needs someone to talk to, contact the Samaritans on 116 123 or email jo@samaritans.org