Clare council ordered to pay man €150,000 in case over right-of-way at Trump course 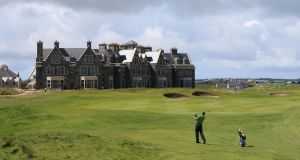 Doonbeg golf course, where the council’s plans to abolish a right-of-way led all the way to the Supreme Court. File photograph: Niall Carson/PA Wire 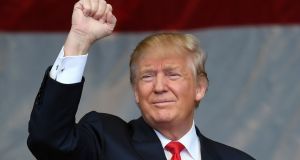 A dispute over a public right-of-way at the Doonbeg golf course in Co Clare owned by US presidential candidate Donald Trump has been resolved, the Supreme Court has heard.

The resolution of the dispute has left the council facing legal costs estimated to be more than €150,000.

Prior to this, local resident James McNulty had brought a legal challenge to a decision of Clare County Council to extinguish a right-of-way through the course to the beach. It arose when Clare county councillors voted by 22 to three in September 2009 to extinguish the right of way, ending the public’s ability to walk across the fourth and 14th fairways.

Mr McNulty appealed that decision to the Supreme Court, where the case was due to be heard yesterday. However, the court heard the council has since decided it was not going ahead with the process of extinguishing the right-of-way. James Connolly SC, for the council, said there had been no response from the new owners, TIGL, to the extinguishment proposal.

Mr Justice Frank Clarke, on behalf of the three-judge court, said in view of the council’s decision, the appeal was now moot, or pointless. The only issue was the legal costs in the High and Supreme Courts.

The council was prepared to allow the High Court costs order to be vacated and Mr McNulty would not pursue those (High Court) costs, the judge noted.

However, Conleth Bradley SC, for Mr McNulty, sought the costs of the appeal in view of the fact the case became moot because of the action of the council in deciding not to proceed.

Mr Connolly opposed the application for costs because the sale of the golf course was outside the control of his client.

Ms Justice Elizabeth Dunne asked Mr Connolly why something was not done to have the legal proceedings dealt with sooner given that it was well known the course had been sold to a company of “the person who has been attracting so much attention lately”.

Mr Justice Clarke said it appeared “Trump has no interest in extinguishing the right-of- way”.

Following consultation with his colleagues, Mr Justice Clarke ordered that the costs of the appeal be awarded in favour of Mr McNulty. The court also struck out the case and vacated the High Court costs order against Mr McNulty. Mr McNulty remains responsible for his own costs arising from the High Court case.

The directors of Doonbeg-based TIGL Ireland Enterprises include Mr Trump, his daughter Ivanka, and his sons Donald and Eric, all with addresses on Fifth Avenue, New York.

Plans by the company to build a 2.8km wall along the beach, which it claims is needed to protect the golf course from erosion, are being opposed by environmental and surfing groups.