Man gets 30 years for murdering Irish wife in Sydney

Christopher Cullen ‘decided to kill ... for his own selfish and personal reasons’ - Judge 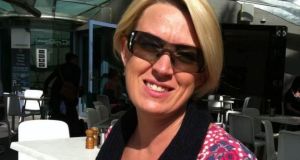 Comrie Cullen (39), originally from Bangor, Co Down, whose husband has been jailed for 30 years for her murder

A man has been jailed for 30 years for murdering his estranged wife in Australia in January 2014.

Comrie Cullen (39), originally from Bangor, Co Down, was found dead near mangroves at a fishing club in southern Sydney. Her throat had been cut and she had been repeatedly stabbed.

Christopher Cullen (51) showed no emotion as he was sentenced at New South Wales Supreme Court.

As friends and colleagues of Ms Cullen wept, Justice Ian Harrison described a frenzied and brutal attack and spoke about a “malignant cycle of domestic violence” in Australia.

He said it was difficult, if not impossible, to imagine the terror Ms Cullen must have felt.

“He [Cullen] did not express remorse or contrition,” Justice Harrison said. “Cullen callously decided to kill the deceased for his own selfish and personal reasons.

“Her death was unnecessary, unwarranted,unfair and inexcusable. The death of the deceased is another example of the extremely prevalent violence perpetrated by men in our society against women to whom they are married or with whom they share a relationship of domestic intimacy.

“This malignant cycle of domestic violence is given publicity and media attention without corresponding or equivalent success in its prevention.”

Cullen accused his wife of having an affair a few months before he murdered her. He threatened to kill her and ordered her out of their home.

Ms Cullen took out a court order against her husband and was receiving counselling.

On the day he killed his wife, Cullen was caught on CCTV buying two knives and a black t-shirt from a fishing shop.

When he was arrested Cullen told police his wife had taunted him about her sex life and he had lost control.

He admitted injuring his wife, but pleaded not guilty to murder on the grounds of self-defence and provocation. This was rejected by the court.

During his trial, the court heard Cullen had anumber of stab wounds when he was arrested, causing him to be hospitalised. He told police: “I think one of them might have been from her and the ones around the heart were from me.”

In sentencing submissions, the court heard Cullen had served several prison sentences in his native England for violent crimes, including an assault involving a knuckle duster.

Cullen will be eligible for parole in 2036.