Man charged in court with murder of Kenneth O’Brien

‘I am responsible for killing Kenneth’ Paul Wells (48) told gardaí 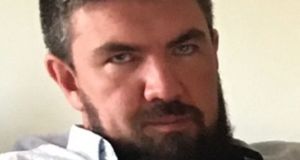 Father-of-one Kenneth O’Brien was reported missing on the evening of 15th January.

A 48-year-old man has been remanded in custody charged with the murder of Kenneth O’Brien whose dismembered body was found in a suitcase in a canal in Co Kildare in January.

Paul Wells told gardaí on Friday “I am responsible for killing Kenneth” when he was charged.

JCB driver Kenneth O’Brien (33) from Leland Road in Clondalkin in Dublin was reported missing on January 15th after he had left his home telling family members he was going to work.

The father-of-one had recently come back from Australia where he had been employed for three years.

The following day his torso was found in suitcase by walkers at the Grand Canal near Cellbridge, Co Kildare.

Investigating gardai carried out an intensive search operation resulting in other body parts being found in bags in the canal. DNA testing was carried out which concluded the remains where those of Mr O’Brien.

Paul Wells, Barnamore Park, Finglas, is charged with the murder of Kenneth O’Brien on or about January 15th and 16th. The murder is alleged to have occurred at the defendant’s address.

Dressed in a blue hooded top, black trousers and white runners, he sat with his arms folded after he was brought to appear before Judge Anthony Halpin at a late sitting of Dublin District Court on Friday.

He had been arrested last Saturday and held for questioning at Naas Garda station.

Garda Sergeant Gerard Moore, of Leixlip station, told Judge Anthony Halpin that at 4.53pm on Friday , he arrested Mr Wells for the purpose of charging.

The 48-year-old man was charged at 5.16pm at Naas Garda Station. He was handed a true copy of the charge sheet and told that anything he would say would be taken down and used in evidence.

Gda Sgt Moore said that in reply to the charge Mr Wells said: “I am responsible for killing Kenneth and I gave a true account of what happened.”

Due to the nature of the offence the district court cannot grant bail. Defence solicitor Kieran Conway said he would have to make a bail application in the High Court.

Judge Halpin remanded Mr Wells, who remained silent throughout the five-minute hearing, in custody to appear at Cloverhill District Court on Thursday.

A statement of his means was handed in to court by the defence solicitor who asked for legal aid to be granted.

Judge Anthony Halpin granted it after noting gardaí had no objection and were aware of the man’s means.

Mr O’Brien’s partner was present for the brief hearing and watched the proceedings from the public gallery.

1 Aer Lingus staff say they are living in ‘near poverty’ and unable to cover rent
2 Coronavirus: Warning of similar measures for other counties as Donegal moves to Level 3
3 Covid-19 Q&A: How are we doing, is there any good news and what happens now?
4 Mother refused meaningful access to teenage daughter in ‘profoundly sad’ case
5 Séamus Woulfe: The last man standing in Golfgate is set to learn his fate
Real news has value SUBSCRIBE