Man charged after seizure of €600,000 of drugs in Co Kildare

Garda operation was targeting the sale and supply of drugs in Kildare, Laois and Offaly 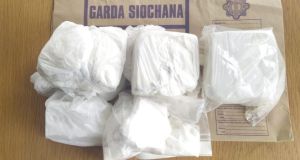 Drugs seized by gardaí in the operation on Saturday. Photograph: Garda Press Office

A man has been charged following the seizure of drugs with an estimated value of over €600,000.

The man, aged in his early 30s, was arrested on Saturday following a search by gardaí of a residence in Louisa Park, Leixlip, Co Kildare.

The search was carried out following an intelligence led operation undertaken by the Leixlip Drugs Unit targeting the sale and supply of drugs in the Kildare, Laois and Offaly divisions.

During a follow-up search of the man’s vehicle, approximately €80,000 of suspected cocaine was seized, gardaí said.

A number of follow-up searches were carried out in Kildare and Dublin on Sunday but no further items were seized and no arrests were made.

The man was detained at Leixlip Garda Station under Section 2 of the Criminal Justice (Drug Trafficking) Act, 1996. He was subsequently charged and was due to appear in court on Monday afternoon.