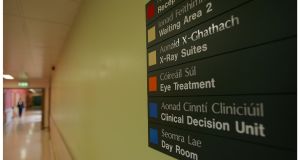 One man is still in critical condition at Cork University Hospital following a house party in Cork where 2CB was being taken. Photograph: Bryan O’Brien/The Irish Times

Gardaí have arrested and questioned a man about the supply of a drug believed to have been taken by a group at a party in Cork after which six people were taken to hospital.

The 29-year-old was arrested in the French’s Quay area of the city at about 4pm on Wednesday for questioning about the supply of 2C-B, which was consumed at a house party on Green Street in the city on Monday night.

The man was arrested under Section 15 of the Misuse of Drugs Act and brought to the Bridewell Garda station where he was questioned for more than 10 hours before being released without charge. A file is to be prepared for the DPP.

Gardaí recovered a quantity of a white powder like substance - believed to be 2C-B - at a house on French’s Quay which they suspect was part of the batch that was consumed by the six people hospitalised.

The powder has been sent to the Garda Forensic Science Laboratory for analysis. The results will be part of the file prepared for the DPP. 2C-B is a pyschoactive substance which some people have used for its stimulant, mood altering and aphrodisiac effects. It similar to products previously sold in head shops.

An 18-year-old man remains in a critical condition at Cork University Hospital (CUH) after being rushed to the facility in the early on Tuesday. He had suffered cardiac arrest apparently after taking the drug. His family are maintaining a bedside vigil.

Three other people taken to hospital after the party remain in a stable condition and two have been discharged.

A man who raised the alarm after hearing “crazy shouting” coming from the house has said the scene inside was like something from “CSI”.

Gerard Banks told the Neil Prendeville Show on Red FM he was walking past the house and heard “crazy shouting”.

“So me and a friend looked in the window to see was everyone okay. The bedroom was covered in blood, walls, floor, bed and even curtains,” he said.

Mr Banks said a man arrived to the window and said everything was fine. He agreed to let Mr Banks and his friend into the house to see if anyone was hurt.

“When we went in it was like a scene from CSI,” he said.

Mr Banks said there was a man and woman naked covered in blood. The naked man was smashing up the house and there was another man on the floor in cardiac arrest with major breathing problems. “It’s really scary stuff and we need to make everyone aware of its dangers,” he said.

The side effects experienced by those who attended the Cork party have prompted the HSE to issue a warning about possible contaminated “party pills.” According to the HSE, 2C-B is sold in tablet, powder or liquid form.

Minister of State for Drugs Aodhán Ó Ríordáin said 2C-B wasn’t on the banned or controlled drugs list. He told Newstalk that drugs were constantly rebranded and altered.

“These are technically legal. Unfortunately with the advent of the internet accessibility of such drugs is more widespread,” he said. “I would call it a crisis to be honest with you among young people in certain parts of the country who are mixing cannabis, alcohol and psychoactive substances together and causing incredible harm to themselves.”

He said there was a “legal loophole at the moment” in terms of certain substances and that the authorities were “always unfortunately playing catch up”.

Meanwhile in a separate operation not linked to the Green Street incident, gardaí arrested another three men as part of a general investigation into the supply of 2C-B in the Cork city area.

The three men - aged 22, 24 and 26 - were all arrested under the Misuse of Drugs Act at houses in the College Road and Highfield Avenue areas and taken to the Bridewell Garda station where they were questioned for several hours before being released.