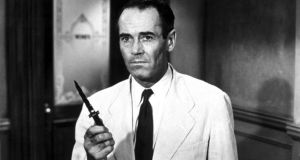 Henry Fonda in 12 Angry Men – the film cast an important light on the jury system - all male – and the dynamics of its debate.

It’s one of the key principles of the Republic’s courts system: that, subject to specific exemptions, nobody shall be tried on any criminal charge without a jury. Yet our understanding of how that should be applied in practice has shifted considerably over the decades.

In the 1927 Juries Act, only landowning Irish men aged 21 or over could sit as jurors; in Ireland and other common law countries, opponents of extending the right to women argued that serving on juries would conflict with their duties at home, or even that the features of certain criminal trials would be too onerous for women of a certain (read delicate) temperament.

It was not until the arguments of the women’s movement won out in the second half of the 20th century – culminating in a landmark Supreme Court ruling in 1971 after a challenge to the men-only rule by activists Máirín de Burca and Mary Anderson – that women finally won the right to serve.

That decision paved the way for the Juries Act 1976, the law that governs jury service today. It widened the pool to include any Irish citizen aged 18 or over who is registered to vote in general elections.

The President, practising solicitors and barristers and members of the Defence Forces, among others, are ineligible. Certain convicted people are disqualified. And a long list of people, including TDs, doctors, nurses, university lecturers and students, may be excused from jury service automatically, or “as of right”. The Act left room for further exclusions, by giving defence and prosecution lawyers the right, before a trial begins, to challenge up to seven jurors without having to give any reason.

Of course the jury room is a closed space; by design, we know very little about what happens when the door closes and the members deliberate among themselves.

But anyone who has sat through criminal trials cannot have been left unimpressed by the commitment and diligence of ordinary citizens in fulfilling what society has come to regard as an important and solemn duty.


Changes in society
Notwithstanding that, it has been clear for some time that jury service rules and procedures have been lagging behind changes in Irish society.

By limiting eligibility to Irish citizens, a large category of resident foreign nationals can’t play their part. The blanket excusal for many professionals and public servants in effect leaves a huge number of working-age people outside the jury pool, giving rise to concerns that juries are often composed mainly of young people and over-65s.

We know, thanks to a study by the Department of Finance in 1993, that only between 30 per cent and 40 per cent of those summoned were available for jury duty, a very high attrition rate.

Long and complex fraud cases pose serious questions about juror comprehension, the rise of crime gangs has increased fears about jury-tampering and intimidation, while the spread of smartphones has made it easier for jurors to look into the past of the accused or carry out their own research – potentially undermining the whole trial process.

These are among the concerns that inform the comprehensive report published yesterday by the Law Reform Commission.

Based on detailed consultations and analysis of the situation here and elsewhere in the common law world, the report makes 56 recommendations across a range of topics.

The commission argues for scrapping the blanket excusal for many professionals and public servants, arguing this is “difficult to reconcile” with the principle that the jury should be representative of the community and be random in nature.

On misconduct, the report calls for the introduction of new offences to punish jurors for wilfully disclosing information about a trial or a jury’s deliberations, and for making inquiries about the accused through the internet or by visiting a crime scene. It states a judge should specifically warn against the use of phone or internet sources.

The report also makes two significant recommendations to address concerns over long and complex trials. It says a court should have the power to empanel up to three additional jurors where a judge estimates the trial will take more than three months, and that judges should have the discretion to appoint an assessor, or adviser, to assist the court and help juries understand technical or complex evidence.

In submissions to the commission, according to the report, there was “general acknowledgment” that some jury intimidation occurs.

To address such concerns, it suggests creating a single offence of jury-tampering, which would cover any attempt to corrupt or influence a jury. It also recommends that access to the jury list should be more restricted, and the daily roll call of the jury abolished.

Not everyone will agree with the commission’s conclusions.


Residence threshold
Some may argue, for example, that the link between jury service and citizenship should be retained, arguing

– as many do in the United States – that one of the key functions of jury service is to educate citizens about democracy.

Others may feel the residence threshold of five years is too high and should be reduced. Others may be surprised that the commission has come down in favour of retaining the right of lawyers to make “peremptory challenges” against seven jurors – a practice critics say leads to certain categories of people being routinely excluded.

But the recommendations – and the draft Juries Bill included in the report – merit serious consideration by the Government.

As one of the few features of the courts system that nearly everyone comes across in their lives – be it by serving or knowing somebody who has done – the jury system’s integrity is vital in retaining and renewing public confidence in the courts.

Circus in crisis: Even if the tent goes up, the problems won’t go away 00:58
Nursing homes were left without a plan, Covid-19 committee hears 00:44
Holohan rejects pressure from Ministers to reduce two-metre rule 00:44
HSE figures show breakdown of 1,030 deaths in 167 care homes 00:38
How is the 14-day quarantine for arrivals from overseas changing? 00:34