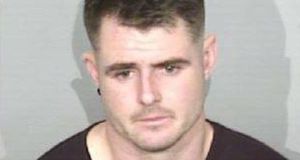 A Co Kildare man who served a jail sentence for the manslaughter of Leitrim student Andrew Dolan has been arrested by police in Australia in connection with two alleged assaults.

Patrick Farrell was arrested in western Sydney on Wednesday and charged in connection with the alleged assaults.

Three weeks ago police had issued a public appeal for help in tracking him down, saying he was wanted for questioning in connection with a “malicious wounding” in Randwick, Sydney on August 31st. They also wanted to question him about a one-punch assault in the beer garden of a hotel in the Sydney suburb of Matraville last November.

It is understood the 29-year-old handed himself in and was arrested by arrangement in the office of his lawyer in the suburb of Parramatta. After his arrest he was handcuffed and escorted by two detectives to the nearby police station.

He is due in court in Parramatta on Thursday and is facing charges of assault occasioning actual bodily harm and with wounding with intent to cause grievous bodily harm.

In July 2013, Farrell from Broadford, Co Kildare, was jailed for 3½ years for the manslaughter of Andrew Dolan, a 20-year-old student of biomedical science at NUI Galway. Two other young people were convicted of assaulting the Carrick on Shannon student.

There has been controversy about how Farrell got into Australia following his convictions. New South Wales police commissioner Mick Fuller who described Farrell as a “dangerous individual” alleged that he had lied on his visa application “in relation to his criminal history”. It is understood he was in the country on a student visa.