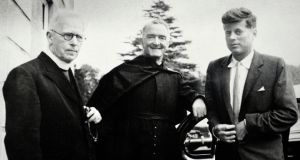 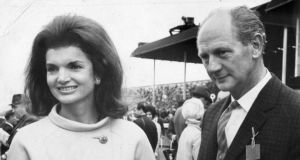 Mrs Jacqueline Kennedy with the taoiseach Mr Lynch, at the Irish Derby in the Curragh in 1967. Saturday. Photograph: Dermot Barry / The Irish TImes

It might seem a bit of a stretch to describe them both as original literary creation but, in copyright law, a scribbled note to the milkman enjoys much the same protection as the deathbed musings of a Nobel-winning novelist. For both the principle is the same: copyright belongs to the author.

Assuming Jackie Kennedy did not assign to Fr Leonard the copyright in the letters she wrote to the Vincentian priest over a 14-year period in the 1950s and 60s – for example, by writing a note to that effect at the foot of each missive – she remained the owner of the copyright. Upon her death, that copyright would have passed to her estate unless she named specific beneficiaries of her various copyrights in her will. In Ireland, copyright runs for 70 years after the death of the author. That means the letters will be protected by copyright for the benefit of Mrs Kennedy’s estate until 2064.

Copyright and ownership of the physical letters are two different things. The recipient, Fr Leonard, was the original owner of the lettders themselves. His rights were to the physical possession of the bundles of paper. After his death, the letters would have passed to his heirs. Anne Bateman, a partner and intellectual property specialist at Philip Lee Solicitors, says it is very doubtful that Fr Leonard would have owned the copyright in them.

“The difficulty is that Fr Leonard died in 1964 without leaving a will, having spent the last 25 years of his life living at All Hallows College, ” according to a background note on the issue, co-written by Bateman. “All Hallows has explained that it is the custom in the Vincentian Congregation [that] a priest’s possessions revert to the community where he had been living. All Hallows has claimed ownership of the letters on this basis. However, it is not clear from the recent news reports whether any relatives of Fr Leonard are likely to appear to challenge All Hallows’ ownership of the letters.”

The fact that copyright over the content appears to belong to the Kennedy estate clearly narrows the room for manoeuvre of the owner of the physical letters, be that All Hallows or any future buyer. Clearly, there would be considerable value and cachet in having possession of Jackie Kennedy’s personal correspondence. A private individual could use them as source material for secondary work.

However, the owner could not publish them in book form without the consent of the Kennedy estate. The principle is the same as owning a book that is still in copyright: you can read it and quote from parts of it, but you can’t scan it and post it online.

If a historian bought the Jackie Kennedy letters and then published them, Bateman suggests, he could find himself having to defend copyright infringement proceedings despite having paid a huge sum of money for them. Publishing extracts together with commentary or analysis would be different; in that case, the historian could claim that his conduct amounted to fair dealing.

Putting the letters on public display would also be permitted – thanks to emergency legislation enacted in 2004 to ensure a major exhibition of James Joyce’s work would not be blocked by a copyright dispute. In that case, the government had paid €12.6 million for more than 500 pages written by Joyce, including drafts of eight episodes of Ulysses and proofs of Finnegans Wake. The material was due to form the centrepiece of an exhibition at the National Library, but Stephen Joyce, the author’s grandson, warned the library that the exhibition could breach copyright laws. At the time, the Joyce estate still held copyright, and the Copyright Act left room for doubt as to whether public display of manuscripts constituted an infringement of copyright. The government responded by rushing through an amendment, thereby clearing the way for the exhibition to open.