Kane McCormack lured to his death by men he knew, gardaí believe 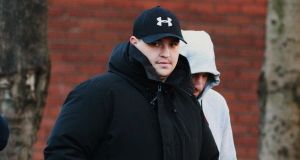 The Garda foiled an attempt on the life of Kane McCormack three months ago and believe he was lured to his death by men he trusted over the weekend.

The 24-year-old was shot dead and his body discovered on farmland in Co Meath at the weekend.

His death is believed to be linked to the Kinahan-Hutch feud. McCormack’s father Noel Kirwan (62) was shot dead in Christmas week last year.

If it is confirmed, as gardaí suspect, that the father and son were killed by the Kinahan gang, it would bring the feud death toll to 13.

One early line of inquiry in the investigation into Mr McCormack’s murder is that the Kinahan gang believed he wanted revenge for his father’s death and posed a risk to their safety.

Noel Kirwan knew criminals on both sides of the feud. He was shot dead, gardaí believe, because it was perceived his sympathies lay with the Hutch side.

Kane McCormack was also linked to dissident republican extortion rackets. Mr McCormack was caught with 50 rounds of .32 ammunition in Finglas, Dublin, last November. It was suspected that find was linked to his extortion activities. Because of the criminals he mixed with and demands he made on people, Garda believe he had other dangerous enemies apart from the Kinahan gang.

In the autumn, the Garda intervened to seize a firearm and vehicle and make arrests during a high-profile operation.

Precise details of that operation cannot be outlined because of legal restrictions. However, gardaí believe the gun seized on that occasion was to be used to murder Mr McCormack.

He was officially warned by the Garda that his life was in danger.

At a recent court appearance, his solicitor objected to his address being read out because of threats to his life.

Last Friday Mr McCormack, who lived in Clonee, told his partner he was going to meet somebody. When he did not return and nothing was heard from him, his partner contacted the Garda early on Saturday to report him missing.

Hours later his body was found on farm land by a woman walking at Walterstown near the Meath-Kildare border. He had been shot in the head.

Gardaí now suspect he may have gone to meet somebody known to him but was instead taken away and shot.

He had parked his silver 04 D Peugeot 307 hatchback at the Aldi supermarket car park in Clonee Village at 5pm on Friday. He was then driven off in a black saloon type car which drove towards Dunboyne.

About an hour later, at 6pm, Finglas gardaí found a black Audi saloon car on fire just off the M50 at Meakstown Cottages.

Garda sources said it was believed he was taken in that car to the spot where he was shot dead and his body left where it was found the following morning.

Supt James Cannon, from Ashbourne Garda station, appealed for anyone who was at the Aldi shopping centre on Friday at about 5pm to come forward.

He also appealed for anyone who saw a black saloon car parked on the side of the road through Walterstown, between Leixlip and Dunboyne, in the area of the murder scene to come forward.

Any members of the public who may have seen the Audi car in the vicinity of Meakstown Cottages or Balseskin Reception Centre at around 6pm on Friday was also asked to come forward.

Supt Cannon added drivers using dashcams may have been at the scenes.