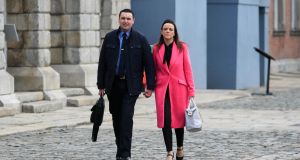 The searing, direct and highly personal criticisms of Garda Keith Harrison contained in Thursday’s report from the Charleton tribunal will be noted by everyone due to give evidence to it over the coming months.

The list of expected witnesses includes two former Garda commissioners, a former tánaiste, a former head of the Garda Press Office, whistleblower Sgt Maurice McCabe, a host of crime journalists, officials from the Department of Justice and possibly other Government agencies such as the Chief State Solicitor’s office. Even a few barristers could be called to the witness box.

The tribunal chairman, Mr Justice Peter Charleton of the Supreme Court, strongly dislikes any waste of public money, and rises to defend institutions of State and public servants who have had their good work and character traduced by false accusations.

Garda Harrison has managed to touch all these bases, and the language used in the chairman’s findings reflects this.

Lawyers who know the judge and who have been watching the tribunal were not surprised by the findings or the language used.

“Everyone now knows, if they didn’t know already, that if he sees any dissembling he will call it out,” said one lawyer. “If you are being economical with the truth, he will call you out. It doesn’t matter who you are.”

Another interested lawyer said: “I’m not at all surprised by his report. He would not have any time at all for that sort of carry-on. Remember he has been through tribunals before.”

Mr Justice Charleton was counsel for the Morris tribunal, which investigated a number of bizarre episodes that occurred in the Donegal Garda Division in the 1990s and early 2000s. The eventual report found that insubordination was rife in the Garda and discipline in the force was breaking down.

There is a cringe-inducing excerpt in Mr Justice Charleton’s report on Tuesday from the tribunal transcript where Harrison was questioned by tribunal counsel Patrick Marrinan SC about “indiscretions, infidelities or just plain cheating” by him of his partner Marisa Simms, including at a time when she was in hospital having lost his child.

“I can see that, yes, I did,” Harrison replied.

It was a form of emotional abuse, counsel put to the witness, who responded by saying he wasn’t proud of his actions.

Later counsel asked Harrison if he was “deeply ashamed as a human being” arising from how he had treated his partner.

Mr Justice Charleton describes Harrison’s claims to the tribunal as “nonsense” on a number of occasions – and in one instance “utter nonsense”.

All of the allegations made by Harrison and Simms about alleged misconduct by Garda officers and staff from the child and family agency Tusla were “entirely without any foundation”, the judge said.

The tribunal process had been one where “serious and damaging allegations of professional misconduct being discovered through inquiry and through public hearings to have been completely unfounded”.

In the circumstances, legal sources were divided as to whether the unrestrained findings by the chairman, and his criticism of the time and public expense directed at investigating the Harrison/Simms allegations, would prompt the tribunal to deny the couple their costs.

In general the legal costs of a party bought before a tribunal can only be refused if they obstruct the tribunal. They cannot be refused their costs solely on the basis that the tribunal did not, in its findings, agree with or accept the evidence they gave.

But legal sources wondered whether the language used by Mr Justice Charleton indicated he might be inclined to disallow some or all of Harrison’s costs, and those of Simms, on the basis of their wasting tribunal time and putting gardaí and social workers who had to defend themselves from the now rejected accusations through the distress and inconvenience which that entailed.