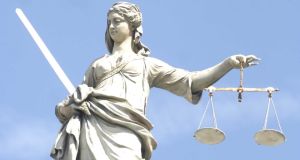 The scales (statue) of justice, on the roof of the Four Courts in Dublin

Unmarried co-habitee awarded significant damages arising from death of partner as result of poor medical care Barry v Health Service Executive [2015]IEHC 791 (High Court, Barr J, December 16th, 2015) High Court assesses damages of €500,063.11 in claim by unmarried partner of a man who died from brain injuries brought about by inadequate and negligent post-operative medical care, including damages as a dependent of the deceased, and damages for her own psychiatric reaction to his death.

No necessity for occupier to give evidence of trespass in burglary case DPP v Connors [2015]IEHC 774 (High Court, Hedigan J, December 8th, 2015) High Court, in answer to case stated from the District Court, holds that it was not necessary in a trial for burglary for the owners or occupiers of premises to give evidence that they had not given permission to the accused to enter the premises, on the grounds that there was ample evidence for the judge to be satisfied beyond reasonable doubt that the accused were present on the property as trespassers with intent to commit an offence

New facts contained in victim impact statement would not have resulted in different cross examination of complainant DPP v MR [2015]IECA 286 (Court of Appeal, Edwards J, May 12th, 2015) Court of Appeal dismisses appeal of conviction of offences committed by accused against his stepdaughter, finding that: 1) the trial judge’s view that it was appropriate to allow some counts to go to the jury (having dismissed other counts at the close of the prosecution case) was legitimately open to him and within his discretion to make; and 2) alleged new facts contained in the victim impact statement given at the sentencing hearing would not have resulted in a markedly different or more extensive cross-examination such as might have made a difference.

Judicial review applicant had no locus standi to challenge refusal of legal aid certificate Ward v DPP [2015]IEHC 783 (High Court, O’Malley J, December 11th, 2015) High Court refuses judicial review of the refusal by a Circuit judge to grant a legal aid certificate for counsel in an appeal from the District Court on severity of sentence, and refuses to declare the scheme ultra vires, on the grounds that: 1) a judge should be entitled to grant a certificate for counsel for the purposes of an appeal only where it was essential in the interests of justice, which in this case of a road traffic guilty plea it was not; and 2) the applicant did not have sufficient legal interest to bring the challenge, as he had not established his entitlement to legal aid.

Plaintiff exaggerated injuries suffered after fall out of hotel window Platt v OBH Luxury Accomodation Ltd [2015]IEHC 793 (High Court, Barton J, November 11th, 2015) High Court dismisses personal injuries claim arising from fall out of window of hotel bedroom, where surveillance footage taken by private investigators disproved evidence the plaintiff had given on oath, demonstrating that his evidence was not honest, credible or reliable and was intended to maximise his potential award.

Examiner appointed to hotel that was deemed to have reasonable prospect of survival In re Claremorris Tourism Ltd [2015]IEHC 796 (High Court, Baker J, December 9th, 2015) High Court appoints an examiner to a hotel that was a large employer in a rural area, taking into account all factors in the petition, including that a former director of a related company who had opposed the petition admitted that there was a reasonable chance of the survival of the hotel.

School board restrained from continuing disciplinary procedure against principal Joyce v The Board of Management of ColÁiste Iognáid [2015]IEHC 809 (High Court, Binchy J, December 15th, 2015) High Court grants mandatory injunction restraining the board of a school from continuing with a disciplinary process brought against the school’s principal, on grounds that the principal had been denied fair procedures in that the school had failed to furnish her with a report that contained findings against her and she had not had an opportunity to respond to them.

These reports were prepared by Stare Decisis Hibernia, an online legal research service. (StareDecisisHibernia.com) The full text of each judgment is published by the Courts Services on courts.ie