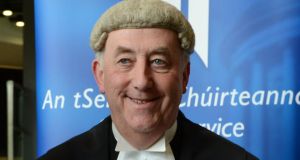 The Association of Judges of Ireland (AJI) has released a statement saying that the comments of Mr Justice Peter Kelly on the topic of judicial independence have the full support of the association.

The statement says that the report of comments of Mr Justice Kelly at a private dinner hosted for business leaders "whilst broadly accurate, contains a number of inaccuracies".

The statement says Mr Justice Kelly pointed out that for almost 90 years of this State's existance there had been no need for an association of judges given the mutual respect demonstrated by the executive and judicial branches of government, one for the other.

"All strucutres, both formal and informal, which existed for communication between these two branches of government have ceased."

The statement said judges accepted at all stages they had to bear their fair share of salary cuts.

However, as the constitutional guarantee concerning judicial renumeration was removed, they asked that an independent body be established to fix such renumeration so as to ensure judicial independence.

"This request was dismissed out of hand", the statement said.

The statement said legislation was passed in respect of pension provisions of new judges without notice or consultation. Those provisions extended by one third the length of time senior court judges have to serve to obtain a pension which was unlikely to amount to half the final salary.

That had major consequences for judicial recruitment in the future, the statement said.

The statement also said the personal insolvency act was enacted without any notice or debate concerning insolvency judges to be initially recruited solely from the ranks of county registrars.

It said no wording concerning those has been forthcoming though they all have huge iimplications for the judiciary. It said the AJI accepts the need for a court of appeal but is concerned at the form of amendment to the constitution which may be proposed.

It also said the association had no information about the proposal concerning specialist family courts.

It said the abolition of the Senate renders the removal of judges subject only to a majority-only resolution in the Dáil while at present a resolution of both houses is required.

"All of these matters have implications for judicial independence," the statement read.