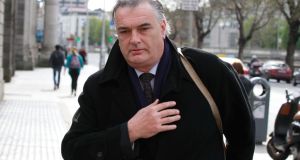 Ian Bailey at the High Court yesterday. He has always protested his innocence and denied any involvement in the death of Sophie Toscan du Plantier. Photograph: Collins Courts

A High Court judge said there were “very disturbing” and “unusual matters” relating to the Garda investigation into the murder of Ms Sophie Toscan du Plantier in west Cork in 1996.

Gardaí have been given 12 weeks to go through some 20,000 documents after former journalist Ian Bailey (56) yesterday won a discovery order as part of a civil action he is bringing against the State.

Yesterday Mr Justice John Hedigan granted the discovery order for a number of items sought by Mr Bailey’s legal team, including all correspondence relating to Mr Bailey between former DPP Eamonn Barnes and his successors, James Hamilton and Claire Loftus.

The judge ordered gardaí to hand over relevant material to Mr Bailey in support of a claim for wrongful arrest in relation to the death of the French film producer on December 22nd, 1996.

Mr Bailey, who was twice arrested for questioning in relation to the killing but never charged, has always protested his innocence and denied any involvement in the death of Ms Toscan du Plantier (39) near her holiday home near Schull.


‘Grossly improper’
Mr Barnes had expressed concern that senior gardaí were engaged in a “persistent” and “grossly improper” attempt “to achieve or even force” a prosecution of Mr Bailey for the murder.

Mr Justice Hedigan also granted discovery of any correspondence relating to Mr Bailey between the minister for justice, the attorney general and gardaí as well as a review of the original Garda investigation carried out in 2005 by assistant commissioner Ray McAndrew.

Mr Bailey’s counsel, Martin Giblin SC, said his side wanted to use these and other documents in the civil action, including a 2001 analysis by an official in the DPP’s office indicating “evidence of innocence on the part of Mr Bailey”.

Among the items sought by Mr Bailey is a memo from State solicitor for west Cork Malachy Boohig, who said a senior garda had asked him to contact then minister for justice John O’Donoghue to use his influence to get the DPP to bring a charge against Mr Bailey.

Counsel for the State Paul O’Higgins SC told the court yesterday that, while it was an offence under the Prosecution of Offenders Act to seek to prevent the prosecution of a person, it was not an offence to seek to have a person prosecuted.