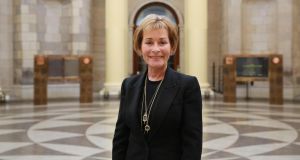 Judith Sheindlin aka Judge Judy in the Round Hall of the Four Courts in Dublin today. Photograph: Collins Courts

The retired judge, who became a television star with her no-nonsense style of dispensing justice, was given a tour of the building. She paid a courtesy call to Mr Justice Peter Charleton of the High Court.

She caused a buzz in the Four Courts Round Hall when she stood for photographs with Kings Inns students waiting to sit practical exams.

She joked she was in the Four Courts “to make a little trouble” and added she imagined dispensing justice and hearing cases here involved more time. She retired from the bench in 1996 and began her daytime series, Judge Judy.

The series, running for 17 years and recently commissioned for four more seasons, attracts over nine million viewers in the US. It is licensed in more than 120 global markets.

The show features Judge Judy dealing with civil cases in a courtroom set. It deals with small claims disputes, up to $5,000 (€3,800). The participants sign contracts agreeing to abide by her judgment.

She once said the Irish courts should adopt a similar approach to the US and allow the installation of cameras to protect against “bad lawyers and judges”.