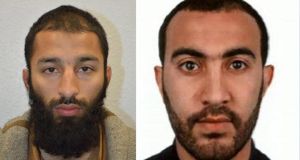 Khuram Shazad Butt and Rachid Redouane who, with Youssef Zaghba, killed eight people in a knife attack in London before being shot dead by police. “Sister Aaliya” claims there are 150 radicalised Muslims living in Ireland

An Irish woman who converted to Islam and was radicalised has told the Garda that members of an Isis terror cell killed in an attack in London this year had discussed carrying out an atrocity in Dublin.

Both the Garda and the British security services are investigating her claims.

However, the woman previously said meetings between extremists she knew were conducted in languages she did not understand and therefore information was hard to corroborate, senior Garda sources pointed out. While the woman’s claims were being examined, there was no proof to support them, the same sources said.

The woman has also claimed that a €2.8 million fraud that was run from Dublin was connected to the men who spoke of a possible terror attack in Dublin.

Her allegations centre around the men who killed eight people by stabbing in early June in London.

The three attackers – Youseff Zaghba (22), Rachid Redouane (30) and Khuram Shazad Butt (27) – crashed a van into a shopfront near London Bridge and then began stabbing people.

They killed eight people and injured 48 others in the attack on Friday, June 3rd. Police arrived on the scene and shot dead the three men.

The woman, who has alleged Dublin was considered by one of the men, Butt, and his associates as a target, first spoke out about the Irish connection just days after the attack.

Identified only as Sister Aaliya, she made some of her allegations during an unusual press conference in the Al-Mustafa Islamic Centre in Blanchardstown in west Dublin.

She has since been interviewed by the Garda and British security services and has made additional claims.

They are that Dublin was considered a target and that a €2.8 million fraud, which had long been under investigation in Ireland, was linked to the London attackers.

Gardaí are taking the claims seriously but say no specific target in Dublin has been mentioned by the woman and that there was no verification of her claims to date.

The woman has said that a Pakistani man had influence over Butt and his associates and discouraged them from considering Dublin as a target. The man was running the major fraud operation in Irish capital, she has alleged.

Speaking at the press conference back in June, Sister Aaliya’s identity was concealed with sunglasses and black niqab. She said she was a 26-year-old Irish woman from Limerick who converted to Islam.

The media event in June was held so she could warn about what she saw as Ireland’s vulnerability to Islamist extremism.

In that context, she said she had met London attacker Butt about 20 times on different occasions in London and Dublin about 2½ years ago.

By the time she spoke it had already emerged that one of the other London attackers, Rachid Redouane, had lived in Dublin for a period. But her claim that Butt had also spent time in the Irish capital was new.

Redouane, a pastry chef who claimed to be Algerian and Libyan, lived at addresses in Rathmines and Glasnevin and married his British wife here.

Last June, Sister Aaliya said she had never met Redouane. But she claimed Butt had been here many times. She was present when he met other Islamist extremists, including at a property in Santry, north Dublin.

“I’ve been threatened on numerous occasions . . . I came back to Ireland to get away from all that,” she told the press conference.

She also claimed there were at least 150 radicalised Muslims living in Ireland.

The fraud she has mentioned was already under investigation here. But her linking it to the same group of extremists that London attacker Butt was part of in Dublin is a new allegation now being examined.

Gardaí have been investigating that fraud under the Criminal Justice Money Laundering and Terrorist Financing Act.

Several foreign nationals, including at least two Pakistani men, are suspected of involvement in the invoice redirect fraud.

The money was sent to the bank account but almost immediately the data storage company realised the invoice was fake. The new bank account details and invoice had been sent by a fraudster and not by the construction company it purported to come from.

Immediately the Garda was alerted and the cash was frozen as it was being moved into several bank accounts.