Irish graduates sought after in Beirut 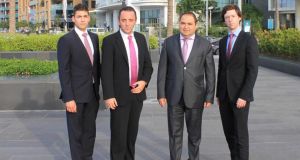 A placement programme at one of Lebanon’s main law firms has been giving Irish and British graduates a taste of international practice in a rapidly changing region.

Mark William Thompson set up the International Associates Programme at Mena City Lawyers in Beirut 2½ years ago to ensure the firm boosted its cache of international experience.

“One of my main reasons for doing it was because I realised, given the dire financial and economic crash back home, you had some incredibly great candidates who couldn’t secure the contracts that they would have done three or four years prior to the crash,” he says.

The firm offers placements to graduates from British and Irish universities. They run year-round for a minimum period of three months and Thompson, who is from Saintfield, Co Down, says Irish candidates have been particularly well- suited to the brief.

“Historically our Irish candidates have actually worked really well. I think it’s a lot to do with the fact that they may be a little more laid-back and they kind of just come with an attitude that they’re willing to adapt, they’re willing to try and fit in.”

During their time with the firm, the young “associates” work on research tasks and provide assistance on cases, litigation, arbitration, and other areas. Thompson says they add “tremendous value alongside our Lebanese lawyers, many of whom have [a] more traditional background”.

In recent years, law firms in the Middle East have started to shift from this traditional “name-above-the-door” type of practice to one that is more globally connected, he says, but the transition has left some of the local firms behind.

“In countries like the Emirates and the Saudis you had these great local law firms, these very successful lawyers and then you had the international law firms move in. It’s just very difficult to compete with those firms.

“They’re much bigger, they have a much broader range of experts and specialisations within the team, but also they can play on the fact that they have an international network to fall back on. So if you have a client you can say, ‘Well, yeah, we can also deal with your litigation in London and we can help you with that transaction in the States and if you need to go to China, we have people there’.”

The shift hasn’t taken place in Lebanon just yet – partly because the country’s laws make it difficult for foreign operations to set up there – “but they [the firms] are circling and they are trying to develop stronger partnerships with some of the local firms”.

For Mena City Lawyers, then, young international graduates like Niall Donnelly are important. Donnelly, who graduated from Trinity College in 2012, says he “jumped at the opportunity” to work in Beirut.

“I firmly believe the time after leaving college and before embarking on graduate programs is a fantastic period to experience new cultures,” he says. “Moreover, the opportunity to work in the Lebanese legal environment can provide skills and knowledge that are increasingly vital in light of globalisation.”

Because MCL is one of the biggest firms in the country, Donnelly says he has had the opportunity to handle “large volumes of legal information”.

The pay reflects the salary structure for Lebanese lawyers, which is considerably lower than that of a lawyer at home or in the UK. Nonetheless, demand is high – the programme receives about 300 applications a year – and associates are enthusiastic about their work.

Marcus Tadros, also a Trinity graduate, came to Beirut after a period working in Gibraltar. He says the work is “extremely interesting and insightful” and praises the city’s nightlife, food, culture and weather.

He adds that a lot of business takes place in Beirut because of its position at the intersection of the Middle East and Africa.

He hopes “to gain a broader perspective on international corporate law which will give me a unique and dynamic approach to my work when I return to the UK or Ireland.”