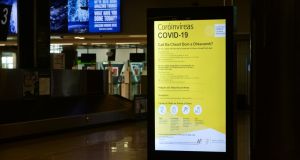 Ireland and several other European countries have introduced legislation requiring proof of a recent PCR test showing a negative result for Covid-19 before allowing passengers into the country. Photograph: Alan Betson / The Irish Times

Irish criminals are allegedly involved in the forging of negative Covid-19 tests to allow people travel within Europe, Europol has warned.

The European police agency said members of the Rathkeale Rovers gang, a group of Irish criminals operating in several European countries, are using a mobile phone application to “manually falsify test results” which are then sold onto travellers for hundreds of euro each.

Ireland and several other European countries have introduced legislation requiring proof of a recent PCR test showing a negative result for Covid-19 before allowing passengers into the country.

“Given the widespread technological means available, in the form of high-quality printers and different software, fraudsters are able to produce high-quality counterfeit, forged or fake documents,” Europol said.

Criminals are now operating from airports, online and through messaging apps to sell counterfeit documents showing a negative Covid-19 test.

These documents typically bear the name of a genuine laboratory and are highly convincing.

The Rathkeale Rovers, which is based in the Limerick town of the same name and operates internationally, is one of several groups involved in the activity across Europe.

A Garda spokesman said the sale of fake PCR test certificates had not been detected in Ireland to date. It is understood the Rathkeale Rover’s activities in this regard are centred on the UK.

Members of the gang have previously been arrested for money laundering, smuggling, drug trafficking and burglary.

Europol said it has received intelligence from an EU country that the gang is using a mobile app allowing them to generate counterfeit test results for onward sale.

The agency details several incidents of various criminals or gangs selling counterfeit tests in Europe and warned member states to be on the lookout for “the illicit production and sales of fraudulent Covid-19 negative test certificates.

“Member States are encouraged to share any relevant information on criminal activities related to fake Covid-19 test documentation with Europol.”

Europol said it is highly likely that production and sales of fake test certificates will prevail as long as travel restrictions remain in place.

Earlier this month, a man was arrested at Luton Airport in the UK while attempting to sell false test certificates. Previously, French police uncovered a forgery ring at Charles de Gaulle Airport in Paris.

Passengers were charged between €150 and €300 for a fake certificate, Europol said.

In December, Spanish National Police arrested a man for selling fake certificates on the internet for €40 each while in the Netherlands, scammers were caught selling them for between €50 and €60 through messaging apps.