‘Inside Probation’ goes behind the scenes at the Probation Service 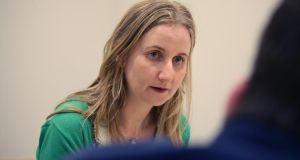 Probation officer Majella Hickey: ‘The cases I find most upsetting are the ones where I can’t develop a therapeutic alliance, where they’re just not ready.’

Majella Hickey looks across the table at Peter Sheridan. His eyes dart around the spartan office, determinedly avoiding hers. “Where to now,” she asks.

The encounter has a sad inevitability to it; for some time, Sheridan has been veering from the course set by Hickey, the probation officer charged with seeing him through his bond period and helping him get his life back on track. Despite their efforts, Sheridan has failed to get his drinking under control and his attendance at the Pathways education scheme has been patchy. And now, the final straw: he has been caught stealing four cans of beer from a supermarket.

Having breached the terms of his probation, Hickey has no choice but to send Sheridan back before a District Court judge. He doesn’t take it personally. “Majella has done her best for me,” Sheridan says after the meeting. “I dug the hole. I hope I can fill it by myself.”

The scene comes from Inside Probation, a two-part documentary series that begins on RTÉ One tonight. Giving a rare insight into an organisation at the frontline of the criminal justice system, its cameras follow four probation officers on their working days in different parts of the country. The viewer sits in on meetings, catching staff at moments of achievement and reversal.

One officer struggles to find temporary housing for a convicted sex offender (his face pixelated on screen) whom nobody wants to take in. A colleague in Co Monaghan is the sounding board for a middle-aged man who seethes with quiet anger at the public humiliation of his court case – he stole two bottles of wine – having appeared in the local papers.

His story isn’t atypical. According to Hickey, 80 per cent of the people she deals with have an addiction. Many are homeless and unemployed, which puts them at higher risk of re-offending and requires intensive supervision – daily contact, in some cases – by the probation staff.

At any one time, Hickey has 50 case files on her desk. Most get through their probation period, typically a year or two. But for both sides, the journey can take its toll.

“I still find cases upsetting, of course,” says Hickey, who was previously based in Mountjoy prison and has been in the Probation Service for seven years.

“The cases I find most upsetting are the ones where I can’t develop a therapeutic alliance, where they’re just not ready. You can just see them going down that path of self-destruction, and there’s nothing you can do and you have to return them back to court. That feeling that you haven’t really helped them, that they’re just not ready. That’s difficult.”

Hickey keeps a journal; she says it helps her get through the difficult days.

Every year the Probation Service assesses about 8,000 offenders, assisting judges in making decisions in criminal cases. Staff supervise people who have been given probation or community service orders by the courts. They also carry out post-custodial supervision, as when an offender has been given supervised temporary release or a conditional suspended sentence.

In a typical case, a risk assessment is carried out to gauge the individual’s risk of re-offending and his risk to the community. Depending on that risk, an individual plan is devised. In low- risk cases that could mean weekly meetings with a probation officer; other cases could require daily exchanges and near-constant phone contact between different organisations.

“I find the adults are structured,” she says. “They’ve been around the block, in and out of prison, and they’ve learned enough to take responsibility when they’re put on probation bonds.

“The most difficult groups I’ve worked with over the last 15 years would be young people. They’re very impulsive.Their brains haven’t fully developed, and they make very impulsive decisions.”

Yet for all the frustrations and setbacks she encounters, Hickey has no doubt about the value of the work.

“I can’t do anything about what happens in the early years, and we all know that 0-4 are the years where most of the damage is done to a human being in terms of their emotional development. But it’s never too late.”

She cites the example of a man she first met in young people’s probation. He was a serious offender, having racked up a string of convictions, including ones for dangerous driving and theft, and was flagged on the system as a health and safety risk from day one.

Hickey came across him recently and saw a man transformed. He has a job in the private sector and is organising a Christening for his first child. That sort of progress couldn’t happen in prison, she remarks, where the setting makes it “very difficult” to rehabilitate offenders and set them on a new course.

l Inside Probation begins tonight at 9.35pm on RTÉ One