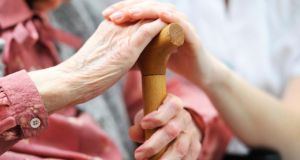 Coroner Eamonn MacGowan, who returned a verdict of death by medical misadventure, criticised the lack of a call bell system in the hospital as well as the length of time it took to summon a doctor

An 86-year-old woman who died following a fall at St John’s Hospital in Sligo had been told to summon nurses by banging a glass or her fist against the bedside table, an inquest heard on Monday.

Coroner Eamon MacGowan heard that that Mrs Teresa Dwyer from Monasteraden, Ballaghaderreen, Co Sligo had been found on the floor in the community hospital at 3.15am on May 24th, 2013.

The bang was so loud when she fell that staff at the nurses’ station heard it. Her family was not notified for five hours and a doctor was not called for almost nine hours, the inquest heard.

Coroner Eamonn MacGowan, who returned a verdict of death by medical misadventure, criticised the lack of a call bell system in the hospital as well as the length of time it took to summon a doctor.

He also cited the low dosage of the anti-blood clotting drug warfarin administered to Mrs Dwyer prior to her death as a factor.

Speaking after the hearing, the family said they hoped no other family would lose their mother in such circumstances. Margaret Dwyer, herself a nurse, criticized the standard of care her mother had received, saying a nine-hour delay in calling a doctor was not acceptable in 2013.

Despite the fact that her mother was so elderly, was on warfarin therapy and had fallen and injured her head in the fall, she was not medically assessed. She said the biggest issue for the family was the lack of a proper call bell system which she described as “antiquated”.

The coroner heard that a new call bell system has been in place in St John’s since November 2013.

The coroner urged that all the recommendations of a critical incident report done after Mrs Dwyer’s death, be strongly enforced. He heard that there is a new falls policy.

The review also called for the availability of a medical officer on a 24-hour basis and regular monitoring of patients.

The coroner was told that the doctor who saw Mrs Dwyer several hours after the fall ordered an emergency transfer to Sligo Regional Hospital (SRH). Consultant geriatrician Dr Paula Hickey who examined Mrs Dwyer in the Emergency Department of SRH said that the 86-year-old had suffered two pelvic fractures in the fall and had a cut on her forehead.

She said the deceased had osteoporosis and was more prone to fractures. Mrs Dwyer had been on warfarin to prevent stroke , and it was surprising that she had developed a clot.

Dr Hickey agreed that the system for summoning staff was “absolutely” unsatisfactory. She also agreed that it was not satisfactory that Mrs Dwyer was not seen by a doctor for several hours.

The coroner heard that Mrs Dwyer had been transferred to St John’s from SRH three weeks earlier for rehabilitation and was due to be discharged on the day she died. Dr Hickey said she believed that Mrs Dwyer either had suffered an acute cardiac event or a bleed from her upper gastrointestinal tract.

The coroner was told that the cause of death was bilateral pulmonary emboli leading to congestive cardiac failure. According to the post mortem report this phenomenon “is a common complication of fractures in elderly individuals”.

Staff nurse Catherine Gurn told the inquest that Mrs Dwyer had been asleep when checked at 3am but 15 minutes later she and a colleague heard a noise and found the elderly patient on the floor. She said she was going to the toilet.

The witness said that Mrs Dwyer had used the commode up to six times a night and always summoned staff by banging her table. Blood was dripping from her left eyebrow when she was found on the floor about a meter and a half from her bed.

Mrs Dwyer was conscious at all times and said she had not knocked or called for assistance, according to the nurse. Later that morning she became very anxious. Nurse Margaret Brummitt also gave evidence of attending Mrs Dwyer after the fall. She said the deceased had a panic attack at 7am and was given oxygen. She later complained of pain in her hip.Nurse Brummitt said she did not know why Mrs Dwyer had not called for assistance that night.

Mrs Dwyer’s daughter-in-law Marie McMahon told the coroner that the elderly woman told her she had called the nurses once or twice “but nobody came”. Ms McMahon said she went to the Emergency Department on the morning of May 24th after hearing Teresa was there.

Her mother-in-law was cold, short of breath and weak and the witness contacted the family telling them they should come. Mrs Dwyer had apologized to the witness saying,“sorry I am such a bother to you”.

Margaret Dwyer said that when her mother was transferred to St John’s from SRH a falls risk assessment had been done and she was found to be at moderate risk of falling. She was attending the heart failure clinic of SRH during her stay in St John’s.

Her mother used a walking stick and was unsteady on her feet. Her mother had fallen off a commode in St John’s the day after she was admitted and was not reviewed by a doctor then.

Her mother who was 86 and “not very loud-spoken” had been told to summon staff by shouting or banging her table with with a fist or glass. When she rang St John’s to inquire abut her mother she was told nurses were “busy” and could not speak to her.

Dr Hickey said that the deceased had been her patient for a number of years. Mrs Dwyer had been reviewed in the heart failure clinic on May 10th. She had seen her in St John’s two days before her death and she was medically stable.

Marie O’Grady, acting director of nursing in St John’s, also agreed that the absence of a call bell system was unsatisfactory. She said the need for a call bell system had been identified as a cause of concern before Mrs Dwyer’s fall and subsequent death.

Other changes had been put in place including a new falls policy since Mrs Dwyer’s death. She agreed that Mrs Dwyer should have been seen by a doctor before 12.20pm.