The project, started in 1992, has already freed 300 innocent people in the US 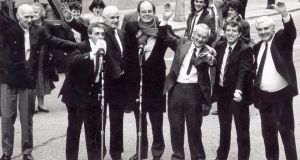 Dodgy forensic science was used to convict the Birmingham Six, pictured in 1991 outside the Old Bailey in London after their convictions were quashed with then MP Chris Mullin. Photograph: Joe St Leger

In 1992, Neufeld co-founded the Innocence Project with lawyer Barry Scheck in New York. The project is based at the Benjamin N Cardozo School of Law at Yeshiva University, where Scheck is a professor.

The project uses DNA technology to free innocent people, over 300 so far in the US, and it is now an international organisation.

“It started as a small project in New York. We now have over 40 in the United States. In addition to the one in Ireland, there are 14 projects in other countries, and it’s expanding. Now there are Innocence Projects in Asia, Africa, Europe, North and South America and Australia,” says Neufeld.

“As we move increasingly towards globalisation, countries want to become more guided by the rule of law in order to advance themselves internationally. One way to do that is to demonstrate that your criminal justice system is fair and just. Having innocence projects, like the one in Ireland, advances that considerably.”

Causes of convictions Neufeld says one of the primary causes of wrongful convictions worldwide is false confession, and fewer than half of the states in the US record police interrogations.

“That’s a big problem. The way you deal with the confession issue is to require that all interrogations are videotaped from beginning to end, to have a neutral and objective record of who said what to whom,” he said.

“It’s not just about civil rights and human rights for the wrongfully convicted. We’re also about improving the system of investigation to improve public safety, to make sure police don’t go down the wrong road and get an innocent guy” rather than the real perpetrator.

Neufeld and Scheck met in the 1970s when they were both working as public defenders in the Bronx.

“Then we continued to work together on a variety of cases, many of which involved the intersection of science and law,” says Neufeld. They saw the advent of DNA profiling as an opportunity to re-examine old convictions where biological material collected at the crime scene was still available.

“We knew from the beginning that this science was going to expose that the criminal justice system was riddled with errors for a whole host of reasons,” says Scheck who, along with Neufeld, famously served as co-counsel on OJ Simpson’s defence team.

This includes the forensic science used to convict the Birmingham Six (who were wrongfully convicted of the IRA pub bombings in Birmingham in the 1970s).

“Initially the prosecution was predicated on the notion that you could swab someone’s hands and see if they had certain chemicals consistent with explosives. Subsequent research showed that you could also test positive if you had unwrapped a pack of cigarettes or playing cards,” said Neufeld.

Wrongful convictions can also be caused by eyewitness misidentification, ineffective assistance of counsel, jailhouse snitches and police and prosecutorial misconduct.

“When you put them all together, you see the whole is greater than the sum of its parts. It’s a whole system that has to be transformed. We’re doing it through science, but all of these institutions have to be reconstructed and reimagined,” says Scheck. Irish Innocence Project “There’s always been enormous interest [in the Innocence Project] in Ireland. The Irish have a natural affinity for those who fight the state and who fight arbitrary miscarriages of justice, which makes sense in light of Irish history,” says Scheck.

The movement reached Ireland in 2009, when the Irish Innocence Project (IIP) was launched at Griffith College by its Dean of Law, David Langwallner.

It made headlines earlier this year for its work in the Harry Gleeson case. Gleeson became the first recipient of a posthumous pardon from the State, almost 75 years after he was executed for a murder he did not commit.

The IIP investigates and seeks to overturn cases by finding new or newly discovered evidence proving there has been a miscarriage of justice.

The IIP only helps people who claim factual innocence and does not work to overturn convictions based on legal technicalities.

Currently, 21 students from Griffith College, Trinity College and Dublin City University are working on 30 cases under the supervision of nine pro-bono lawyers. Conference and Film Festival Scheck and Neufeld will speak at the IIP’s first International Wrongful Conviction and Human Rights Conference on Friday June 26th at Griffith College. Speakers will include former president Mary McAleese and Gareth Peirce, who successfully worked to overturn the convictions of the Guildford Four and Birmingham Six.

On June 27th, also at Griffith, the first-ever Wrongful Conviction Film Festival will feature nine films, Q&A sessions with directors and exonerees and will end with a special screening of In the Name of the Father with director Jim Sheridan.