Numerous shootings have brought Dublin's north inner city to national attention recently. Harry McGee looks at the areas underlying issues and what can be done to improve the situation. 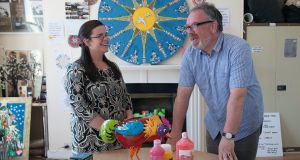 Gary Broderick, Director of the Saol Project, which helps women in dealing with addictions and with prison rehabilitation, pictured with After-Care worker Belinda Nugent, a former client of the project. Photograph: Dave Meehan/The Irish Times 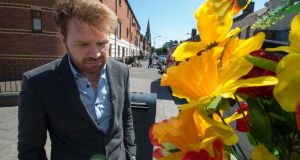 Councillor Gary Gannon examines a floral tribute on Sherriff Street to the man who was shot dead in a case of mistaken identity recently. Photograph: Dave Meehan/The Irish Times

On the corner, a group of seven or eight young men congregate. Most are dressed in baggy shorts and T-shirts. Sharp haircuts are in evidence. So are tattoos. They talk among themselves, smoke. One idly kicks a wall with the sole of his foot. They are watchful too of those who pass.

In most other corners of the city, you wouldn’t really think twice about this gathering: a group of teenagers hanging around.

But given the sulphuric atmosphere in the northeast inner city of Dublin – caused by the savage Kinahan-Hutch killing spree over the past two months – it makes you pause, cross the street, blinker any curiosity in your gaze as you pass.

Another corner a few streets away, this time on Sheriff Street. In mid-April a young drug addict, Martin O’Rourke, was shot dead by a hitman, a victim of mistaken identity. It was another Kinahan incursion into this territory to kill a Hutch connection. Six weeks later, long after the media circus has departed, a colourful floral tribute still decorates the spot, put there by local people, who also contributed to the cost of the funeral.

Addicts are the Donald Trumps of street life north of the city centre. Their number is small yet their presence is huge. They are highly visible with their hollowed ghost faces and pinhole eyes. They ramble across busy streets oblivious to traffic. They seem to exist in a constant state of shouty squabbling.

She is shocked to the core at what has happened. As is just about everybody else you meet. Three women, all in their 40s, stand outside a shop eating ice-creams, enjoying the sun of early June. They express revulsion at the killings and release of video footage of Gary Hutch’s murder. All are ultra-friendly, but won’t go on the record because it’s a tight community and there are lots of sensitivities.

“People are hurting and are shocked,” says Belinda Nugent who lives in Killarney Street and works with Saol, a project that helps women recovering from addiction. Another local resident, Martin Yeomans, is passing by. He says the cycle of violence has been so extreme it has left a huge sense of uncertainty: it makes people nervous of walking about as they are thinking: “Who’s next?”

The three killings, and other assassination attempts, over two months has been as shocking to residents here as it has to those from better off suburbs who consume it in the media. Most of the time, life is as taciturn and uneventful here as in many other places.

Something dramatic or egregious has to happen before politics responds.

And the knee-jerk reactions.

Only when there is a major crisis does some kind of political response become unavoidable. In the early 1980s, it was a hung Dáil and the happenstance that Fianna Fáil needed the vote of a newly elected Independent TD for Dublin Central. That spawned the Gregory Deal, in which Tony Gregory negotiated cash for his inner-city constituency.

Fifteen years later, in 1996, the most meaningful and multifaceted response (ie, something more than a police or judicial crackdown) was prompted by the murder of Veronica Guerin.

In between, local people (particularly Concerned Parents Against Drugs in the 1980s) took the initiative to push drug dealers out of their communities. It was controversial. There were accusations of vigilantism, but CPAD argued the State was letting these hoodlums terrorise their communities with impunity. Someone had to act.

The latest set-piece national political response has been to the barbarous feud involving the Kinahans and Hutches. What is striking about the response is its narrowness – all about law and order.

In the seminal film Boyz n the Hood, about drug gangs in black US ghettoes, Furious Styles summarised the tragedy of every poor urban area in the world:

Sure, the north-east inner city has deep-seated and complex problems, all of which stem to one degree or another from poverty and deprivation. The latest CSO census figures from 2011 showed in some small areas in the inner city, male unemployment peaked at over 70 per cent. One third are areas of disadvantage and 10 per cent are classified as extremely disadvantaged. The roots of this stem from the 1960s and 1970s when there were no replacements after the two big types of employment – docking and clothes manufacturing – began to die out.

Over half the housing is rented from the council. In some pockets, lone-parent households make up four out of five of households. Early school-leaving, while not as chronic as in the past, is still a massive problem. The net result is, it struggles to avoid being ignored by the political class.

The drugs trade is a reality here and has been for well over three decades. Is it worse than the heroin scourge in the 1980s? It’s hard to tell. The nature has changed. “Polydrug use is the norm,” says Gary Broderick, director of Saol, which works with women recovering from addiction. “There is lots of weed, heroin is still there. There is cocaine, crack cocaine, massive table use.”

While Saol’s budget has been slashed, five times as many women apply for courses as did in 2002.

Grace and her group advise people who have been intimidated by drug dealers.

She has said very young boys, as young as 12 or 13, have been getting into debt over “weed”. She says families with drug debts live with fear and that has increased in recent months because of the escalating feud in the area.

Local Social Democrats councillor and activist Gary Gannon has noticed a big increase in prescription drug selling in the last few years. “You see blister packs of benzodiazepine and antidepressants being sold blatantly,” he says.

Mel Mac Giobúin manages the North Inner City Drugs Task Force, one of the bodies which emerged after Veronica Guerin was murdered. He refers to another dimension that adds a layer of criminality. The area is a hub (because of its location near a port and “tradition”) for national distribution by international criminals. The current feud is an outworking of that, he says.

He says the area still has big pockets of poverty but has a lot going for it now, including the ever increasing role of sport as a force for the good.

“The vast majority of people are law abiding and want the best for their kids. However, the influx of drugs has changed everything. When you get an area which is deprived, nobody else cares too much about it when it is contained. It is somebody else’s problem.”

Many groups and agencies were established after Guerin was killed in 1996. It was the first time that the State looked beyond being “tough on crime” to being “tough on the causes of crime”.

It started well, says Mac Giobúin, but somewhere along the line the organisations no longer had the ear of influence. After 2008, the budgets were slashed for all organisations, leading to some programmes being abandoned.

“At best, they were merely containing it . . . giving the illusion of action for appearances sake. Government reactions have only been reactive and have been short-term. It’s mainly been about putting gardaí on the streets

“When somebody gets shot, the ERU [Emergency Response Unit] is sent in and and we get bombastic statements from ministers. It is PR politics and does not address the issues.

“They have not sat down with local principals and primary school teachers and health professionals. The question they need to ask is, how do you get people out of poverty? That’s what you need to tackle.”

Mac Giobúin was asked last year by then minister of state for drugs Aodhán Ó Ríordáin to identify one priority above all else, “What I said to him then was it’s about having safer places for our children to play.”

It was a simple statement with a complex reality. To build a safe playground, free from vandals, junkies or pushers, requires a step-change in tackling poverty, unemployed, drug use, as well as issues surrounding health and housing.

Gannon argues strongly there is a disconnect between Government policy and what’s happening on the ground, that national politicians don’t appreciate, or are ignoring, the realities.

“There were 679 drug-related deaths in 2013 and 88 of those were heroin overdoses. That is an epidemic. We would be bringing in emergency responses if that happened anywhere else.’

Broderick has very strong views on a crisis that he believes has gone beyond policing: “It’s time that we as a country said, the north inner city needs help. They are our brothers and sisters living there. They are not this alien group over there.

“People don’t choose to become addicts and grow up without hope. As a nation it’s really time we thought of it in that longer-term vision, rather than the short-term ‘let’s get guards on the street’.

“We need the Garda to be well-resourced. Guards have been nothing but supportive.

“But we can’t draw a full stop there. This does not happen just because two gangs are at each other’s throats. We need more complex, intelligent, creative and brave leadership. We need to see more from the politicians.”

It is doubtful we will see much more.