Central Dublin to get 30km/h speed limit from midnight

As the Garda look to impose a 30 km/h speed limit and increase speed cameras to over 1,000 locations in Dublin, we look at the facts behind speeding in Ireland. Video: Enda O'Dowd 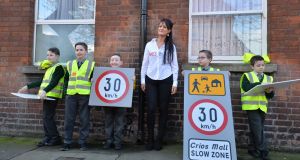 A new 30km/h speed limit will apply to all residential areas in Dublin city centre from midnight as part of a road safety initiative introduced by the city council.

The new limit will be applied to all residential areas and near schools in the city centre.

New signage will be erected to alert motorists to the changes.

It represents the first stage in a multi-phase process to reduce speed limits across the entire city council area, and 30km/hr zones will be extended to suburbs including Sandymount, Glasnevin, Crumlin and Cabra from May.

The announcement comes following an analysis of road safety statistics across Europe.

Signs at the launch event at Francis Street CBS school on Friday outlined that collisions between a car and pedestrian at 60km/hr will result in fatalities 90 per cent of the time, but this drops to 10 per cent at 30k/h.

“We know from research in the UK and around Europe that we would expect to see between 10 and 25 per cent less injuries on roads where the 30km/h limits apply,” said Green Party councillor Ciarán Cuffe, who chairs the city council’s Transportation Strategic Policy Committee.

He continued: “People are concerned about being slowed down but we think it will add at most a minute to a journey time and that’s a small price to pay for increased road safety,” adding that 80 per cent of inner city residents approved of the new limits during door-to-door polling.

An integral factor behind the local authority’s decision to approve the new limits in December was the campaigning of Roseann Brennan from Kilkenny, whose six year-old son Jake was knocked down and killed by a driver while playing on a road in their estate in 2014.

“It’s time pedestrians take back our city again. Cars are dominating it and it’s time we take it back a bit. People give out that they’re not allowed go faster, 30km/hr is reasonable in a busy place like this with housing estates,” said Ms Brennan, who had a pointed message for other councils.

“It’s coming up to three years since my little boy was taken up to heaven, it does take time but definitely I want to say that people should be proud and delighted because there are not a lot of county councils that are taking this seriously. Let’s just hope that they follow suit.”

The initiative is supported by the Road Safety Authority and the Dublin Cycling Campaign, whose spokesman Domhnall Egan said more still needs to be done to protect cyclists following a spate of deaths in and around the city recently.

“The only way cyclists will be safe is if motorists slow down on the road. Also, they need to give way to cyclists and be aware of cyclists. An initiative like 30km/h is a good starting point, but that’s only the start of a greater, broader initiative,” he said.