Ian Bailey extradition ruling closes another chapter, but is unlikely to end saga 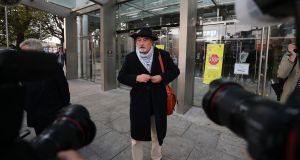 Ian Bailey leaves the High Court in Dublin on Monday following the court’s decision to reject the French authorities’ request to extradite the British former journalist to serve a sentence for the murder of filmmaker Sophie Toscan du Plantier in 1996. Photograph Nick Bradshaw for The Irish Times

Although Mr Justice Paul Burns has yet to formalise his order prohibiting Ian Bailey’s extradition to France to serve a sentence for the murder of Sophie Toscan du Plantier, his ruling seems to close another chapter in the story.

It is still open to the State to appeal the ruling but, in his 64-page judgment, Mr Justice Burns provided a comprehensive review of the issues before concluding that Mr Bailey should not be surrendered to France.

In the judgment, which took almost an hour and a quarter to deliver, Mr Justice Burns went through the arguments made by both lawyers for Mr Bailey and for the State over 2½ days last July.

Both sides had sought to interpret previous Irish court judgments on previous attempts by the French to have Mr Bailey extradited to their advantage, but in the end it was Mr Bailey’s lawyers who won the day.

And while there may have been difference of emphasis in the various judgments by the five judges of the Supreme Court in that 2012 ruling, the result was conclusive: Mr Bailey should not be extradited to France.

Essentially, the Supreme Court decision came down to two points. Firstly it was not clear from the first 2010 French warrant if the extradition was for the purpose of trial as required under the Irish European Arrest Warrant Act 2003. Secondly, there was the more complex issue of reciprocity. Under French law, France claims extraterritorial jurisdiction to try an alleged perpetrator of a crime committed against a French citizen outside of France.

Ireland, in contrast, only claims extraterritorial jurisdiction in the case where an offence is committed outside of Ireland and the alleged perpetrator rather than the victim is Irish.

The Supreme Court ruled in 2012 that the Irish extraterritorial provision was not the equivalent of the French legislation and therefore they were not reciprocal and Mr Bailey could not be extradited to France.

Last July, lawyers for the State argued that issue of whether the current warrant was for the purpose of trial had been resolved by the fact the new warrant was for Mr Bailey to serve a sentence imposed by the French courts.

The three-judge Cour d’Assises in Paris found Mr Bailey guilty in absentia of the voluntary homicide of Ms Toscan du Plantier (39) at her isolated holiday home near Toormore outside in West Cork on December 23rd, 1996.

And Judge Frederique Aline handed down a 25-year prison sentence to Mr Bailey – who was not legally represented at the trial – for “the extreme gravity” of the murder of the film producer and mother of one.

Lawyers for the State further argued in July that Ireland’s extraterritorial jurisdiction for murder under Irish law was extended by the Criminal Law (Extraterritorial Jurisdiction) Act 2019 which came into effect in April 2019.

This new legislation was in place when the French authorities issued the third and current EAW on June 21st, 2019, after Mr Bailey’s conviction in absentia in Paris and his sentencing to 25 years for the murder of Ms Toscan du Plantier.

Lawyers for the State argued that the new legislation allowed Ireland to prosecute an alleged perpetrator for a murder outside of Ireland where they are an Irish citizen or ordinarily resident in Ireland.

However, lawyers for Mr Bailey argued the proper interpretation of Section 44 of the European Arrest Warrant Act 2003 meant the new legislation, extended to include persons ordinarily resident in Ireland, still failed to establish the requisite reciprocity.

Mr Justice Burns found that the new legislation was not sufficient to address the issue of reciprocity as identified by the 2012 Supreme Court judgement and he ruled that Mr Bailey should not be surrendered to the French.

Afterwards, lawyers for both Mr Bailey and for Ms Toscan du Plantier’s family in France said they both wished to study the judgment in more detail while lawyers for the State will also be subjecting the ruling to close scrutiny.

Whether or not the State chooses to appeal the ruling will only become apparent later this month but, while this chapter of the Ian Bailey/Sophie Toscan du Plantier story may close, the saga is unlikely to end any time soon.