How two lawyers ended up on opposing sides in 1916 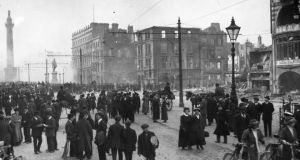 In the days following Easter Week 1916, barrister William Wylie helped to prosecute 160 rebels for their role in the insurrection. One, however, was unique: William Corrigan, a Dublin solicitor who, before the chaos, was a colleague and friend to the up-and-coming king’s counsel.

The extraordinary trial of Corrigan, which took place in a makeshift courtroom in Richmond Barracks 98 years ago today, set in motion a series of encounters which would inextricably link the two lawyers to the creation of the Irish State.

Corrigan was born in Dublin in 1888, the son of an undertaker and Irish Parliamentary Party member. He attended Blackrock College where he excelled in rugby before qualifying from Trinity College as a solicitor. He immediately began work in his older brother Michael’s firm on St Andrew Street, which became known as Corrigan & Corrigan.

He joined the Irish Volunteers and served as a lieutenant at the South Dublin Union during the 1916 Rising. He was badly wounded during the fighting and, after the surrender, was taken to Richmond Barracks to face a court martial.

William Evelyn Wylie was born in 1881. He also studied law at Trinity before being called to the bar in 1906. He was a keen cyclist, a fact noted by a passage in Ulysses which describes a bicycle race between Wylie and his fellow law students.

As a barrister he worked mainly on the northwestern circuit where he achieved considerable success. His friend and fellow barrister Tony Babbington later recalled that “he was a great opponent, very clear-headed and quick off the mark”.

He took silk in 1914 before joining a training programme for British officers at the outbreak of the first World War.

After Easter Week, the young king’s counsel was given the task of prosecuting the dozens of rebels who had been selected for trial. Gen John Maxwell, who had been appointed military commander of Ireland during the Rising, had ordered that trials would take the form of field general courts martial. These were stripped-down versions of the standard courts martial. Proceedings would be held behind closed doors and prisoners would not be entitled to legal representation.

Aspects of the trials would later be found to be illegal but at the time, they were deemed absolutely necessary. The idea was to convict and shoot enough rebels to send a strong message to the general population. History would show that it was a startling miscalculation on Maxwell’s part.

Despite being the head prosecutor, Wylie recognised the deficiencies of the proceedings. He frequently attempted to help the rebels in their defence; military history interviews show that several of them remembered him in positive terms decades later.

Wylie meets Corrigan
It was in these circumstances that Wylie came across Corrigan in a corridor of Richmond Barracks where the solicitor was waiting for his turn in the dock.

The trials were proceeding incredibly quickly and at this stage dozens of rebels had already received death sentences. Most of the sentences would later be commuted to prison terms, but 15 men would end up before the firing squad.

Before the Rising, Corrigan had briefed Wylie in several cases but the dynamic was now very different. “My God, Corrigan, what are you doing here?” Wylie exclaimed when he recognised the bloodied head of his former instructing solicitor.

Corrigan replied that he was next to be tried and asked if he had any chance. Wylie responded that the previous three defendants had been sentenced to death but that he would do his best for his colleague. As Seán Enright writes in the marvellous Easter 1916: The Trials, Wylie ended up prosecuting the case. Despite this, he gave an impassioned speech in favour of his friend and also examined Corrigan in his own defence.

After the trial, presiding officer, Brig Gen Charles Blackader sensed something was off and commented to Wylie that he “seemed in earnest about that man”.

“In earnest!” Wylie replied. “I should just think I was! He is a solicitor and before this show started, I got a case from him to advise one of his clients. There was a cheque for five guineas with it which I haven’t cashed yet and, if you execute, that cheque might not be met, so I was very much in earnest.”

According to Wylie biographer Leon Ó’Bróin, this was met by a stunned silence before the officers broke down in laughter.

Corrigan was sentenced to death with a recommendation to mercy. His sentence was commuted to five years of penal servitude. He was sent to a prison in England but, before departing, he told his brother Michael to see Wylie to thank him for saving his life. Wylie recalled that he met his “bold Willie Corrigan” again on Parliament Bridge in 1919, the day after his return from a British prison.

“You’re still at it I hear,” Corrigan said to him. “Well if Mrs Wylie is anxious, tell her not to worry, for if orders are issued to do you in, I’ll probably hear of it and I’ll give you a ring.”

“What a country,” Wylie later wrote in his memoir.

By this time the War of Independence was well under way. Wylie was now the senior legal adviser to the British administration in Ireland while Corrigan & Corrigan acted as advisers to Sinn Féin and the new Dáil government.

By 1920, Wylie had risen high and was using his influence to stem reprisals from British forces in Ireland. He personally warned prime minister Lloyd George against introducing martial law in Ireland, as had been done with disastrous consequences in 1916.

The Dublin legal circle was small even then and despite his high office, Wylie again met Corrigan, this time in a quasi- professional capacity.

Corrigan acted for the Grangegorman Mental Hospital which had sworn allegiance to the new Dáil government. A consequence of this was that the British administration refused to keep funding it, raising the possibility of the patients having to be turned out on to the streets.

When Corrigan sought his old friend’s advice, Wylie remarked that “this will be a nice town to live in, with the Black and Tans, the IRA and lunatics aboard.”

This crisis was averted but the encounter led the men to discuss how they could stop the bloodshed. The two lawyers went off to their respective sides and proposed a meeting. The result was a bizarre gathering in the offices of Corrigan & Corrigan on September 26th, 1920.

Arthur Griffith represented the republicans while senior Dublin Castle civil servant John Anderson represented the British. Between them were the barrister and the solicitor. The meeting was strange in that each party remained in different rooms throughout. Griffith refused to come face to face with Anderson without signed assurances that the British would deal with the Dáil on equal terms. Anderson wouldn’t consider it.

Wylie and Corrigan rushed back and forth between the men with messages and documents. However little was achieved and Anderson left half an hour later.

Although there was not much to show for it, the meeting was significant as it was the first time two senior officials from both sides had met in the same building, if not the same room.

It was a very small first step towards the truce that came the following year. Wylie and Corrigan both went on to become important fixtures in the nascent legal system of the Irish Free State. Wylie was appointed to the High Court by the new government where he served until 1936. He died in 1964.

Corrigan was appointed as solicitor to the attorney general and he died in 1962. The offices of Corrigan & Corrigan can still be found on St Andrew Street.