House of Lords hears call for protection for NI journalists 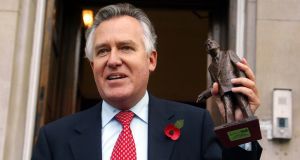 Former Labour Northern secretary Peter Hain: called for the British government and the Northern Ireland Executive to move urgently to implement a compensation scheme for victims of violence in the North. File Photograph: Tim Whitby/PA

Two former Northern secretaries in Labour governments have joined a veteran Conservative adviser in calling for more effective action against paramilitary threats to journalists and politicians in Northern Ireland.

Jonathan Caine, who advised successive Conservative Northern secretaries, raised the issue in the House of Lords, asking what support the British government was giving to journalists and politicians who have recently been threatened by paramilitaries.

“Does he agree that the recent death threats to journalists and politicians in Northern Ireland from paramilitary groups are quite frankly beyond despicable and have no place in any society that is based upon democracy and the rule of law?” Lord Caine asked junior minister James Younger.

“The 2015 Fresh Start agreement, which I helped to negotiate, contained a number of commitments to tackle paramilitary activity. But while some progress has been made, it is limited. Does my noble friend agree that everyone in Northern Ireland should be able to go about their daily business without threat or the fear of threat, and that we now urgently need a renewed and serious effort to put all paramilitary groups, which were never justified in the past and have no justification today, out of business for good?”

Former Labour Northern secretaries Peter Hain and Paul Murphy backed Lord Caine’s call, adding that the British government and the Northern Ireland Executive should move urgently to implement a compensation scheme for victims of violence in the North.

Lord Younger said the government endorsed the National Union of Journalists’ (NUJ) statement last month in solidarity with journalists who received threats from paramilitaries and politicians who spoke up for press freedom and also received threats.

“Journalists play a vital role in our society, as do the public representatives who have defended press freedoms. It is unacceptable that they should find themselves threatened for doing their job. We gave the fullest possible support to efforts to tackle the threat from the groups involved in terrorism and paramilitaries in Northern Ireland, supporting the PSNI with additional security funding and the Northern Ireland Executive’s programme to tackle paramilitary activity, criminality and organised crime,” he said.

Lord Younger said the Executive’s strategy for dealing with paramilitarism, was based on long-term prevention, building confidence in the justice system and tackling criminal activity.

But former Ulster Unionist Party leader Reg Empey said it was time for a fresh approach. “It is now 22 years since the Belfast Agreement was ratified by referendum. And yet every single one of the paramilitary organisations in Northern Ireland, plus a few that have developed since, are still functioning. Surely that demonstrates the need for an absolutely fresh start in terms of tackling this paramilitary violence,” he said.

Further restrictions to be considered in Dublin and elsewhere as Covid-19 cases rise 08:25
Sinn Féin’s Michelle O’Neill calls Van Morrison’s anti-lockdown songs ‘unhelpful’ 08:12
Coronavirus: Almost half of Irish people believe the worst ‘is ahead of us’ 07:17
Budget 2021: Women’s council calls for increased payments for new parents 05:31
How to get ready for a graduate scheme 05:00