Opinion: Time to redefine the regulatory system for journalism in Ireland 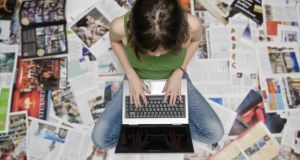 ‘It’s as if both sides of the media industry – print on the one side and radio and television on the other – were hoping the new-fangled digital media was a trend that might just go away.’ Photograph: Getty Images

The media regulatory system in Ireland has a decidedly old-fashioned feel. On the one hand, there is the Broadcasting Authority of Ireland, charged under legislation to oversee radio and television; meanwhile, over in Westmoreland Street in Dublin’s city centre, is the Press Council and the Press Ombudsman that administers the voluntary system for the newspaper and magazine industry. Nowhere is there a regulator for online media.

Only one solely web-based publication has joined the Press Council, TheJournal.ie, though it is believed its application was not met with wholehearted enthusiasm.

It’s as if both sides of the media industry – print on the one side and radio and television on the other – were hoping the new-fangled digital media was a trend that might just go away. Of course, the Press Council can adjudicate for web-based publications, but mainly as adjuncts to their newspaper parents. In the case of RTÉ’s websites, strangely, they do not come under any regulator at all.

It would appear that there is a long overdue case for redefining the regulatory system for journalism.

So why look at the workings of press regulation now? Well, the retirement of the first press ombudsman, Prof John Horgan, after six years offers an opportune time to examine the system and consider where it might go from here.

Without doubt the Press Council of Ireland has had a good first six years. It started life under a threat. At the launch of the council the then minister for justice, Brian Lenihan, said: “I don’t think I am breaching any State secrets when I tell you that not all my colleagues had boundless enthusiasm for this approach [the establishment of a press council] . . . I am bound to make it clear to you that if the media fails to show respect for the right to privacy. . . the government will have no choice but to proceed with its privacy legislation.”


Libel reform
The Press Council was established for two reasons, as far as newspaper proprietors were concerned, as a quid pro quo for libel reform, and to stave off the threatened privacy legislation. Both have been achieved – there is little talk of privacy legislation today, and libel reform has taken place, or as much reform as it likely for some time to come. Others had different agendas. Journalists did not want to find they were excluded, as had happened in the UK, so the NUJ has a place on the council.

The British press in Ireland did not want to be involved at all and there was quite a campaign to rubbish the council before it was established. In the end nearly everyone joined and have, by all accounts, worked well together for the past six years, alongside the public interests members (who have no media links, but represent the wider public).

The Irish system also became a form of gold standard of press regulation at the Leveson inquiry into the phone hacking and media ethics in Britain. A number of media organisations pointed to the “Irish model” as it became known, as something that Britain might import. Britain is still debating what its model should be, which is unlikely to be the Irish model, but it was nice to have a day in the sun.

So, if it has been a success so far, what about the next phase? No one is claiming they know what the media landscape will look in five years, let alone 10, except to say it will be very different, and in the meantime the Press Council has to survive and adapt.

Survival might be a problem if declining circulations means less money paid to support the council. Some of the constituent bodies may start looking at the number of complaints received, and wonder why they are supporting a complaints system at all.

Magazines received only seven complaints in 2012 – the last year for which figures are available – regional newspapers, only 22, compared to 481 for national newspapers.


Discourse
The discourse that preceded its establishment is of a different era. Today the debates are about how media will fund itself, and even who is a journalist in a world of tweets, blogs and Facebook. One argument goes that the journalists of the future will be defined not only by what they do for a living or how they are employed, but how they do journalism.

If the audience want news and opinion they can trust, they might need a standard in place that allows them to separate real, honest, verifiable journalism from other noise.

It should mean TheJournal.ie, rather than being an anomaly in a world of print, is pointing to the future, when anyone doing journalism needs to show it adheres to certain standards that are clear and transparent, and can be held accountable to those standards, and that might mean tweeters and bloggers joining the press council alongside TheJournal.ie, The Irish Times , and even RTÉ’s websites and eventually, and why not, news and current affairs in RTÉ, news in TV3, and Newstalk and other radio stations, so that broadcast journalists are judged alongside their print and online peers?


Membership
It might also give magazines a reason to stay in membership, because the press council and press ombudsman of the future will not just be fighting off threats of privacy or fearful of the old libel laws, but will be defining journalism.

People who want to be journalists and organisations that want to show their audience their journalism adheres to a code and a standard will feel that they must join up.