Holding Ireland to account for violations of basic human rights

Ireland’s international obligations must be recognised, even in the face of austerity 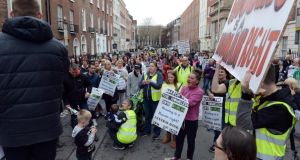 People taking part in a march against homelessness and the treatment of homeless people in Dublin recently. Photograph: Eric Luke / The Irish Times

Today and tomorrow, Ireland’s record on protecting human rights will be considered by the United Nations Committee on Economic, Social and Cultural Rights in Geneva.

In 1989, Ireland agreed to be bound by the International Covenant on Economic, Social and Cultural Rights (ICESCR). The right to work, just conditions of employment, the right to social security and social assistance, protection of children and families, the right to health, housing, food and water, and the right to respect for and protection of culture encompass the core rights protected under the covenant.

When Ireland agreed to be bound by this international rights treaty in 1989, the State was fully aware of its core obligations. Ireland has legal duties to respect, protect and fulfil these rights.

Along with civil and political rights such as freedom from torture, the right to a fair trial and freedom of expression, economic, social and cultural rights place the inherent dignity of the human being at its core.

All human rights involve certain aspects of non-state interference: procedural guarantees to ensure respect for rights, remedying breaches of human rights, and ultimately, ensuring human rights are fulfilled by positive action on the part of the State.

Through agreeing to be bound by the protection of core socioeconomic and cultural rights, Ireland also agreed to have its compliance with the treaty supervised by the UN Committee on Economic, Social and Cultural Rights. This chiefly involves the committee considering periodic country reports, along with dialogue between Ireland, the Irish Human Rights and Equality Commission, and civil society organisations.

In December 2014, the UN committee set down some key issues on which Ireland must provide information in this week’s examination of how it has met its obligations under the covenant.

Many of these issues were specifically addressed by civil society organisations in their shadow reports. The ill treatment of persons with disabilities in residential care, the low level of the minimum wage, the failure of the State to recognise Traveller ethnicity, the rights of those in poverty, such as lone parents, and the necessity for all in society to have access to an affordable and quality water supply.

The UN committee has not had an opportunity to consider Ireland’s record in protecting economic, social and cultural rights for 13 years. Since Ireland’s last evaluation, there has been a sustained economic recession, coupled with a prolonged period of austerity.

A recent ESRI report, The Great Recession, Austerity and Inequality, has produced strong evidence that the poorest in society suffered the greatest decline in income and living standards, when compared with other groups. The homelessness crisis that has affected many people shows no sign of abating. Families are condemned to spend extended periods in temporary accommodation in hotels and B&Bs.

As part of the UN’s review of Ireland’s human rights record on economic, social and cultural rights, the Public Interest Law Alliance, a project of the Free Legal Advice Centres (FLAC) has provided a co-ordinated civil society response in its report, Our Voice, Our Rights. More than 80 representative organisations contributed to this report, highlighting the violations of economic, social and cultural rights occurring each day in Ireland.

Our Voice, Our Rights

Over the last number of years, significant numbers of people in Ireland have suffered grave deprivations due to the recession. Political decisions taken by the Oireachtas on resource allocation have had enormous negative impacts on people on the margins of our society.

Dr Liam Thornton is a lecturer in law in UCD and a member of UCD Human Rights Network. Along with others, he will be in Geneva as part of the civil society delegation contributing to the discussion on economic, social and cultural rights in Ireland. You can access the Our Voice, Our Rights report at ourvoiceourrights.ie