Defence strategy stretched credibility and at times bordered on grotesque 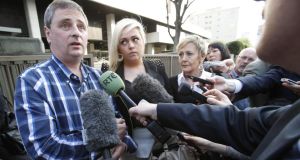 In a justice system with a conviction rate of more than 99 per cent, it was never likely that Richard Hinds was going to return home to Memphis, Tennessee, this week. But even that slim prospect of a not-guilty verdict was destroyed by a defence that always stretched credibility and at times bordered on grotesque.

Hinds testified throughout the trial that he and James Blackston were reluctant participants in the tragic events of May 24th last year, initially approached, he claimed, by two sexually aggressive women (Nicola Furlong and her friend) who wanted to “party”. Neither was interested in sex with the women, they said, they were simply being kind when they took them back to the Keio Plaza Hotel.


Leering braggadocio
Hinds maintained this story despite a conversation full of leering, predatory braggadocio recorded in the taxi to the hotel. “These bitches fell into our lap,” said one of the men. Then Blackston spoke crudely about the prospect of having sex with them. At one stage the men exchanged fist bumps.

Nine months later, Hinds would dismiss that conversation as “meaningless talk” in the Tokyo district court. His defence team said such language was common in the black community and did not indicate intent. The judges clearly thought otherwise, concluding, like everyone else who heard it, that the men intended to rape two unconscious women.

Hinds’s lurid defence ended with his testimony last week in which he claimed Ms Furlong came around in room 1427 of the hotel and indicated she wanted sex. Hinds obliged by “lightly” throttling the exchange student, but not enough to kill her. Even when Ms Furlong began to cough up blood, she wanted to continue, he said. He described himself as a “gentleman” for following her wishes.

Despite clear forensic evidence that Hinds had throttled the Wexford woman for several minutes, he said his “light pressure” had lasted only 30 seconds. His lawyers argued until the end that a combination of alcohol and prescription drugs in Ms Furlong’s bloodstream had contributed to her death, ignoring the testimony of Dr Kenichi Yoshida, who carried out the postmortem and called that “irrelevant”.

Hinds’s lawyers tried to portray Ms Furlong as a drug addict because of needle marks on her thighs. The doctor in the emergency room of the Tokyo Medical University Hospital explained, however, that they were the result of attempting to take blood from her lifeless body. The misfired strategy was a mark of desperation.

For two weeks, the faces of Ms Furlong’s parents, Andrew and Angela Furlong, were a study in contrasts. For long periods throughout the trial, Ms Furlong’s father closed his eyes or held his head in his hands, at times clearly appalled with what he was hearing. But Angela Furlong’s face has been a rictus of concentration, her eyes unwavering, focusing on the man who killed her daughter sitting a few feet away in court.

The pattern was repeated yesterday as the panel of three professional and six lay judges filed into court at 3pm. Although long expected, the verdict was a shock for the Furlongs, who must face the prospect that Hinds could be out in five years.

Mr Furlong closed his eyes and leaned back; Angela Furlong flinched but continued to stare at the defendant, even as she started to shake and cry.


Broad smile
At the end of Judge Masaharu Ashizawa’s long explanation for the verdict, Hinds was again cuffed by two prison guards, fastened with a rope, and led out of the courtroom. As he walked past his family in the public gallery, he gave a broad smile to his mother and brother. Watching feet away, Ms Furlong’s mother shook her head.

For most of his trial, the defendant sat head bowed, avoiding Angela Furlong’s glare. “I don’t take my eyes off him,” she said after the trial began, as though searching his impassive face for answers.

Hinds’s family watched too, ignoring reporters, his mother nervously clutching her hands beneath a scarf, his brother occasionally closing his eyes in apparent silent prayer. On Wednesday last, after he had tearfully told the Furlongs their daughter did not suffer when she died, his mother leaned across and said: “I love you.”

With his conviction, Hinds will take up residence in a Japan ese prison, where he will be forced to work in silence for about 5,000 yen (€41) a month.

The Furlongs believe he has yet to tell the truth of what happened in room 1427. Two sets of families leave Japan this week without answers to a sordid, heartbreaking crime. But only one can expect their child to eventually return home.