Graham Dwyer and Angela Kerins appeals among major cases of 2020 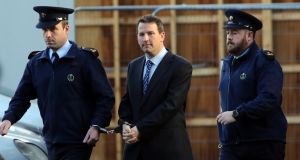 Graham Dwyer: appeal over use of his mobile phone data in his trial. Photograph: Collins Courts

Women, including terminally ill Ruth Morrissey and former Rehab chief executive Angela Kerins, are at the centre of several important cases and judgments in the higher courts as the new law term kicks off in January.

The Supreme Court is expected to give a key judgment during this term setting the standard of care for cervical cancer screening, with implications for the work of the Cervical Check tribunal and many cervical cancer cases. That judgment arises from an appeal by the HSE and two laboratories against a High Court decision in favour of Ruth Morrissey, from Limerick, who sued over misreading of her cervical smears. The core issues in the appeal include what standard of care should apply in cytoscreening and whether the HSE has liability for the acts and omissions of cytoscreeners.

Irrespective of what the Supreme Court decides, the Government has guaranteed that Ms Morrissey and her husband Paul will retain their €2.1 million damages award.

The court is due to hear submissions on the appropriate sentence to be imposed on a man for the rape of his wife. Those submissions will be prepared in the context of a very significant recent Supreme Court judgment concerning sentencing in rape cases, particularly for marital rape involving a pattern of violent and abusive behaviour.

The five-judge court said all those events, not just one in isolation, must be considered to arrive at a “just result”.

The judgment was given after the DPP had appealed to the Supreme Court against a Court of Appeal decision reducing to a total eight-and-a-half years prison time the sentences imposed on the man for rape of his wife, threats to kill her and a hammer attack on her.

The DPP argued the Court of Appeal should not have viewed the rape in isolation but rather as a “pattern of violent and abusive behaviour”.

In the High Court, the family of 27-year-old Natasha Perie, who, due to concerns about the Eighth Amendment, was kept on life support for almost four weeks in late 2014 after being pronounced brain dead at 15 weeks pregnant, are expected to finalise their damages claims against the HSE arising from her death.

The HSE earlier this year accepted liability concerning the main claim by the family: that Ms Perie’s death was caused by failure to diagnose a brain cyst that ruptured, leaving her brain-dead days after her admission to the Midland Regional Hospital Mullingar on November 27th, 2014, having complained of severe headaches on a number of occasions.

A mediation to assess damages for that will be held on January 13th, with the main focus of those claims being damages for her two young children to compensate for the loss of their mother. The family previously settled claims for nervous shock over the circumstances of Ms Perie’s death, including for having to go to the High Court in December 2014 to get orders permitting the ending of the somatic treatment being administered to the young woman whose physical condition was rapidly deteriorating.

The High Court ruled on St Stephen’s Day 2014 that the treatment could be ended on the basis that the only prospect for the unborn was “distress and death” and Ms Perie was entitled to dignity in death.

During the November hearing to approve a €150,000 settlement of the nervous shock claim for Ms Perie’s daughter, now aged 11, the girl was described as a “sad child” who, when asked what would she ask for if she had three wishes, said: “I want my Mam back.”

Also in the High Court, former Rehab chief executive Angela Kerins is pursuing a claim for substantial damages over her treatment before two hearings of the Dáil Public Accounts Committee in 2014, which she has described as a “witch hunt”.

The Supreme Court had ruled, in the first leg of Ms Kerins case, that the committee acted unlawfully outside its terms of reference and outside the terms of its invitation to Ms Kerins to appeal before it. Now the High Court must decide if she is entitled to damages.

Ms Kerins wants damages on grounds including loss of her annual salary, bonuses and company car with Rehab from the time of her resignation after the PAC hearings in 2014 to retirement age. She is also expected to claim over the impact of her resignation on her pension.

The Dáil and State are expected to strongly argue she has no entitlement to damages, in proceedings that raise important legal issues never previously decided by the courts. The proceedings, which are at an early stage, are listed before the High Court on January 20th.

Another case with potentially significant implications for the Dáil is due for case management in the High Court in January.

Four Opposition TDs want permission to expand their legal action to argue that a process under which the Ceann Comhairle decides whether or not a Bill requires a “money message” may be unconstitutional.

They claim that a Bill seeking to link exploration licences with meeting carbon reduction targets had been “strangled” by the Ceann Comhairle in line with a possibly unconstitutional process followed by the Dáil and Government.

Deputies Bríd Smith, Richard Boyd Barrett, Gino Kenny and Paul Murphy, all members of the Solidarity/People Before Profit grouping in the Dáil, have brought judicial review proceedings against the Ceann Comhairle, Sean Ó Fearghail, with the Attorney General as a notice party.

Their case proceedings arose from the Ceann Comhairle’s refusal to allow a debate on a motion that sought to prevent the blocking of Opposition Bills by withholding a “money message” necessary to allow them to proceed through the legislative process.

They now want to be permitted expand their case to also challenge the Ceann Comhairle’s earlier May 2019 decision that the Bill required a money message and to join the Minister for Communications, the Government of Ireland and Dáil Éireann to the case.

The Ceann Comhairle has indicated he will oppose any such expansion, and the other parties are expected to take a similar stance.

Back in the Supreme Court, the State, Garda and DPP will be anxiously awaiting the court’s judgment on the State’s appeal against an important ruling in a case by convicted murderer Graham Dwyer over use of his mobile phone data in his trial.

The High Court decision, if upheld, could assist Dwyer in his separate appeal against his conviction for the murder of childcare worker Elaine O’Hara.

The State has told the Supreme Court of its concerns about the “enormous” implications of the High Court ruling for the fight against serious crime and terrorism here.

The appeal, heard in mid-December with judgment reserved, is against a decision by the High Court’s Mr Justice Tony O’Connor declaring that part of the State’s data retention laws concerning information generated by telephones contravenes EU law and provides for an indiscriminate data retention regime.

Dwyer, who denies killing Ms O’Hara, had claimed data gathered from his phone, under the Communications (Retention of Data) Act 2011, should not have been used at his 2015 criminal trial as that breached his rights, including to privacy.

Mr Justice O’Connor found sections of the 2011 Act concerning access to retained data contravene EU law and the European Court of Human Rights, because there was no prior review by a court of administrative authority.

Dwyer’s appeal against his conviction remains on hold pending the Supreme Court judgment. The High Court ruling is said to be already adversely affecting serious crime investigations despite the High Court having suspended its declaration pending the outcome of the appeal.

In the Central Criminal Court, Aaron Brady (27), from New Road, Crossmaglen, Co Armagh, is due to go on trial on January 13th, charged with the murder of Garda Adrian Donohoe in the course of his duty at Lordship Credit Union, Bellurgan, Co Louth.

A separate trial, that of Kieran Greene, for the murder of 61-year-old Patricia O’Connor, whose remains were found scattered in the Wicklow mountains, is listed before the Central Criminal Court later in January. Mr Greene (32), of Mountain View Park, Rathfarnham is charged with the murder of Ms O’Connor at Mountain View Park between May 29th and May 30th, 2017.

In Dublin Circuit Criminal Court, struck-off solicitor Michael Lynn is due to go on trial on January 13th for alleged theft of almost €30 million.

Lynn (50), Carlton Square, Maynooth, Co Kildare, is charged with 21 counts of stealing the money from seven financial institutions. In two sample charges, he is accused of stealing €4.1 million from Irish Nationwide on April 4th, 2007 and €3.6 million from Ulster Bank on October 20th, 2006.

He left Ireland in 2007 but was extradited from Brazil last year, after spending four-and-a-half years on remand at the Cotel prison, in northwestern Brazil, as he fought his extradition back to Ireland.