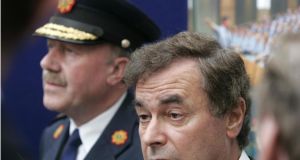 The Fine Gael-Labour Coalition has been forced to endure repeated policing crises since coming to office.

A minister for justice has gone, a Garda commissioner has retired, a Garda confidential recipient has been relieved of his post and a secretary general at the Department of Justice has been unceremoniously moved sideways.

Despite Garda and Government promises of reform in policing, the need for action seems as pressing as ever .

Kieran Boylan case: In May 2013 the Garda Síochána Ombudsman Commission (GSOC) said it was was unable to substantiate allegations that the Garda permitted convicted drug dealer Kieran Boylan to sell drugs and had dropped serious criminal charges against him because he was a Garda informer.

It said its investigation had been blocked for years by a deliberate lack of cooperation from Garda headquarters.

The then garda commissioner, Martin Callinan, vehemently rejected the charges. The then minister for justice Alan Shatter was forced to intervene to end a public war of words between Mr Callinan and GSOC, saying it undermined public confidence in both.

Garda whistleblowers: In February 2014, criminal barrister Seán Guerin was asked to review allegations by two Garda whistleblowers who claimed gardaí were abusing their power to cancel motorists’ penalty points. For more than two years they had faced resistance within the Garda and Department of Justice, with Mr Callinan branding the men’s actions “disgusting”

In an unprecedented public rebuke of the then commissioner, Minister for Health Leo Varadkar said the whistleblowers were “distinguished”.

When the Guerin report was published in May 2014 and contained serious criticism of the Department of Justice, Mr Shatter resigned. “Bugging” of GSOC offices: In February 2014, as the Garda whistleblower controversy was spinning out of control, it emerged in the Sunday Times that GSOC had called in UK security experts to carry out sweeps of its offices the previous year because it suspect it had been bugged.

GSOC released a statement saying at no time was the Garda suspected of being behind the bugging. Mr Callinan was irate, saying any mention of the Garda in the context of the possible bugging implicated the force. It resulted in a damaging war of words between the two agencies.

Garda malpractice allegations: In February 2014 Fianna Fáil leader Micheál Martin told the Dáil he was in possession of documents that alleged a series of murders, abductions and serious assaults that were not properly investigated. He said the allegations had come from the Garda whistleblowers and were centred mainly on the Cavan-Monaghan division. The Government established a process in the department to reviews allegations of Garda wrongdoing, including failure to properly probe crimes up to an including rape and murder. That process is ongoing, with over 300 cases under review.

Garda Inspectorate report: In November 2014 a report by the Garda’s Inspectorate on Garda investigation of serious crime was published and was critical of the force.

Secret recording of calls: On March 25th, 2014, Martin Callinan retired with no notice for “family reasons”.

Later in the day, the Cabinet and the leaders of the main Opposition parties were informed by the Taoiseach of the widespread taping of calls into and out of Garda stations since the 1980s.

The Fennelly Commission of Investigation is set up by the Government to examine the practice, its first interim report – into the departure of Mr Callinan from office – having been published on Tuesday.

The Minister has now instructed Commissioner O’Sullivan to carry out a new review in light of last month’s murder of McGuigan and the PSNI’s implicating the IRA in that killing.