Sinn Féin says arrest is politically motivated prior to elections 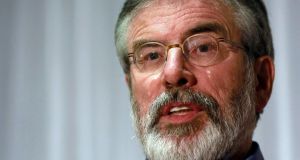 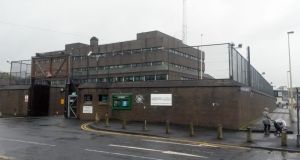 Sinn Féin president Gerry Adams remains in custody tonight after being arrested last night in connection with the 1972 abduction, murder and disappearance of Jean McConville.

Mr Adams spent last night at Antrim police station where detectives from the PSNI’s serious crime branch are questioning him about the death of the widowed mother of 10.

He is being held at the PSNI’s Serious Crime Suite at Antrim police station under the Terrorism Act 2000 which means he can be held for up to maximum 28 days.

However, under a series of checks and balances, extensions to the questioning period must be sought and obtained throughout.

Police can hold Mr Adams for up to 48 hours from the time of arrest. After they point they must apply in court to have the time of detention extended.

It is understood that point will be reached at around 8pm tomorrow.

Prior to presenting himself at the station yesterday, Mr Adams said he was “innocent of any part” in the murder.

He has always rejected claims he was involved in the murder of Mrs McConville just before Christmas 1972. The widowed mother of 10, then aged 37, was taken from her home in the Divis flats complex on the Falls Road by the IRA. Her children never saw her again.

Her body was finally recovered from Shelling Hill Beach in Co Louth in 2003. Mr Adams has always denied involvement in her murder.

Other members of Sinn Féin have claimed the arrest was the result of political manoeuvring and malice.

Five weeks ago, following his decision to instruct his solicitor to write to the PSNI offering to see them about the case, Mr Adams told The Irish Times he had nothing to do with her disappearance.

Asked at a party rally in Drogheda if he still denies any involvement in the death of Mrs McConville he said simply: “Yes, absolutely”.

Speaking in Dublin this morning, Sinn Féin deputy leader Mary Lou McDonald said Mr Adams was not a suspect in the PSNI investigation but had been the subject of “an awful lot of malicious commentary” concerning the case.

She said Mr Adams had stated his willingness to speak to the PSNI. She said party was concerned with the timing of the arrest, coming amid local and European election campaigns.

“We find ourselves in the middle of campaigns now North and south,” she said, adding, “the timing is politically contrived”.

She said some elements of the DUP and the Traditional Unionist Voice as well as some “of the old guard within the” PSNI had been pursuing Mr Adams.

“I do and we do very strongly feel that there is an element of political manoeuvring and political malice in this,” she told RTÉ’s Morning Ireland.

In an apparent response to Ms McDonald’s claims Taoiseach Enda Kenny said his party had no connection with the arrest of Mr Adams.

“I want to make it perfectly clear: parties in the South, and I speak for our own, have had absolutely no connection with this at all,” he told the Dáil today.

“I hope the president of Sinn Féin, deputy Adams, answers in the best way that he can, the fullest extent that he can, the questions being asked about a live murder investigation by the PSNI,” he added.

Fianna Fáil, meanwhile, has called on Ms McDonald to withdraw her remarks she made this morning. “By moving so quickly to criticise a police investigation and question the motives of the officers involved, it is deputy McDonald who has introduced politics into this inquiry,” the party’s justice spokesman Niall Collins said.

Last year the PSNI won a long court battle to gain access to taped interviews with republicans concerning the killing of McConville.

In 2001 Boston College commenced a five-year oral history project aimed at documenting perspectives on the Troubles from those involved in the conflict.

Academics, historians and journalists interviewed former paramilitaries, both republican and loyalist, about their roles in the 40 years of violence that blighted Northern Ireland.

The participants took part on the undertaking that their accounts would only be made public upon their death.