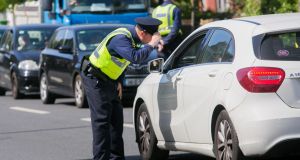 Gardaí at a checkpoint in Dublin on Friday. Senior officers claim enforcing Covid-19 restrictions has become unrealistic and unworkable for the force. Photograph: Gareth Chaney/Collins

The Garda’s role in enforcing Covid-19 restrictions has become untenable and the force should return to more regular policing duties, senior officers have told The Irish Times.

A number say they believe the time has come to bring an end to the Garda Covid-19 enforcement role, which they claim has become unrealistic and unworkable.

The issue is expected to be raised by Garda representative bodies at a teleconferencing meeting with senior management next Tuesday. Sources said there was support for the move in the upper echelons of the Garda but that senior management were obliged to follow the wishes of the Government and the National Public Health Emergency Team (NPHET).

“When the measures were at their most restrictive it was much clearer and you could enforce them but the situation is very different now,” one Garda source told The Irish Times. That source added that as more businesses open, including retail outlets and restaurants, the situation would only become more confused and unworkable.

“If you look at the smoking ban in pubs, it’s not the gardaí who enforce that, it’s the health authorities. It’s time to examine that now for Covid-19 and the gardaí return to regular policing.”

Another Garda source pointed out the force had no powers to enforce the 2m social distancing measure, explaining it was advice rather than an enforceable regulation.

“When restaurants re-open, do gardaí go in there and check that people are 2m apart? If they’re not, what power do gardaí have to enforce that? They have no powers,” he said.

“So you either ramp up those Garda powers and the whole enforcement piece, or you stop Garda enforcement and move responsibility on to people themselves and business owners,” he said.

Other sources said it was clear very large numbers of people were going walking or meeting in parks and other locations in groups. They believed it was not possible for gardaí to break up such a large volume of meetings, especially when they had no power to take action against those not socially distancing but who were within 5km of home.

The Association of Garda Sergeants and Inspectors (AGSI) said it was essential Garda members had clarity on the regulations so a “uniform policing approach” could be taken.

Garda Representative Association (GRA) general secretary Pat Ennis said: “Further consideration needs to be given to the application of the relevant regulations and the practicality of enforcing them. That’s likely to increase those difficulties as the lockdown unwinds.”

In reply to queries, Garda headquarters said: “The enactment of legislation is the responsibility of the legislature. The enactments of the regulations is matter for the relevant Minister of the Executive. An Garda Síochána does not comment on these functions.”

A number of Garda sources said while enforcement of the 5km in relation to those playing in golf clubs was being regularly reported in the media, there were no more concerns about golf clubs than any other element of the enforcement challenges now arising.