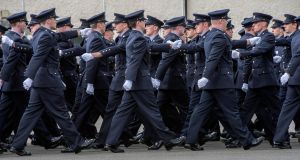 Garda recruitment needs to be ramped up to about 900 new members per year for up to five years if adequate policing is to be provided, Garda superintendents have said.

While about 650 trainees are due to enter the Garda College, Templemore, Co Tipperary, this year, the Association of Garda Superintendents has said it was clear this was not enough.

The association said recruitment far exceeding the rate of retirements was needed if Garda numbers were to grow.

Speaking at the conference, AGSI general secretary Denis Ferry said the need for extra recruitment was still pressing despite improvements in other areas, such as the provision of new vehicles.

He said that about 300 Garda members were retiring annually and there was an urgent need for vacancies to be filled in specialist units.

“We have probably identified about 800 to 900 extra per year,” he said in relation to the level of recruitment that was needed for the next three to five years.

“That would just build the capacity up over the next number of years.

“We met the commissioner recently and we’re all in agreement we’re looking at that minimum of an extra 150 to 200 per year.

“The Garda was now suffering the impact of the recruitment embargo, which was introduced in 2008 and lifted in the autumn of 2014,” Supt Ferry said.

“We’re now seeing the evidence of that impact and it’s going to take time to build back up; maybe three to five years to build that capacity back up and decide what’s the optimum number of police officers we need.”

He said the main constraint was the Garda force’s budget, rather than the organisation’s capacity to take in such a large number of recruits.

He said the Government must decide whether to increase that budget.

Asked where the most pressing need for additional personnel fell, he said: “I think it’s evident it’s the frontline, because that’s the core responsibility of the organisation; to ensure we’re there for operational policing. But there is demand right across the organisation.”

He said there were “changing threats” to An Garda Síochána and security in the Republic, which needed to be met with sufficient personnel.

“It’s really important the specialist sections are also built in terms of numbers and that’s something that the [Garda Commissioner] and all of us [should] prioritise.”

1 Coronavirus: Cabinet to assess ‘stay at home’ measures as 50,000 deaths expected worldwide
2 Coronavirus: Should everybody be wearing masks to combat Covid-19?
3 ‘Everyone still thinks it’s a joke’ - parents of toddler with coronavirus speak out
4 ‘It’s Sinn Féin against the rest’: NI Executive in conflict over coronavirus
5 Coronavirus: Trump’s tone changes as US faces brutal loss of life
Real news has value SUBSCRIBE