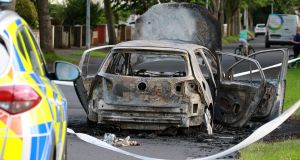 A burnt out car, thought to be a getaway vehicle, is seen at Huntstown Wood near the scene of a shooting in Castlecurragh Heath, Mulhuddart. Photograph by Crispin Rodwell/The Irish Times. 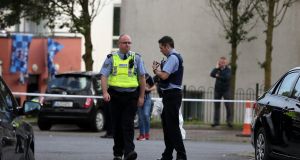 Gardaí at the scene of a shooting incident in the Castlecurragh Heath area of Mulhuddart, Dublin on Saturday. Photograph: Brian Lawless/PA Wire.

Gardaí in west Dublin are still searching for a motive for the gun attack on a foreign national in Mulhuddart on Saturday.

The man, who is aged in his 40s, was shot three times, and suffered serious injuries but is expected to make a full recovery.

One of the bullets grazed the top of his head and he was able to speak to paramedics when they arrived at the scene. He is currently in stable condition at Connolly Hospital in Blanchardstown.

The victim was sitting in his Volkswagen Passat in Castlecurragh Heath in Mulhuddart at about 5.30pm when two men approached the vehicle. One man fired several shots with a handgun through the rear driver’s side window. At least one bullet hit another car which was unoccupied at the time.

The victim was parked in a residential cul-de-sac and there were several children playing near-by at the time of the attack.

The shooting was witnessed by several onlookers who also saw the men fleeing the scene. Gardaí believe the men fled in a hatchback car which was found burnt out in the Huntstown Wood estate, about a five minute drive from the scene of the shooting.

It is understood the victim has no known significant links to organised crime and gardaí are still unsure what motivated the attack.

There have been a series of gun attacks in the area in recent months, with many of them believed to be related to a gang feud involving factions based in the nearby Corduff area.

At the start of June a man in his 40s was shot in the stomach with a shotgun in Blakestown in Mulhuddart. He survived the serious injuries sustained.

In April, a gunman opened fire outside Riversdale Community College in Blanchardstown. His target, a rival gang member in the Corduff feud who was collecting his younger brother from school, escaped unharmed.

Eric Fowler (34) was fatally shot last December outside his home at Blakestown Cottages, Blanchardstown. Mr Fowler was closely associated with people linked to the Kinahan drugs cartel in the city and gardaí believe he may have been murdered as part of the Hutch-Kinahan feud.

The area has also been plagued by dozens of low-level feud related attacks including shots being fired at houses and assaults on people on the streets. Gardaí have stepped up patrols in recent months, including high-visibility policing by the Armed Support Unit, in an effort to quell the violence.