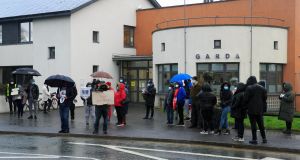 Gardaí are investigating the sending of abusive and racist mail to the family of George Nkencho who was shot dead by gardaí in west Dublin last week.

The handwritten letter, which was received through the post by the Nkencho family on Tuesday, refers to them using racial slurs and states the sender is “glad” Mr Nkencho is dead.

The letter, which was addressed to the family home in Clonee, tells the family to get out of the area and alongside several other racist statements.

Mr Nkencho was born in Nigeria but moved to Ireland with his family when he was seven.

The letter has been passed to gardaí in Blanchardstown. It is understood it will be investigated under harassment and threatening behaviour legislation.

Garda scenes of crime examiners are to examine the document for fingerprints and analyse the postmark for clues about its provenance.

“An Garda Síochána is investigating the origination and contents of correspondence which has been brought to our attention,” a Garda spokesman said.

Mr Nkencho was shot dead by the Garda armed support unit outside his home after he assaulted a shopworker in a nearby supermarket. He was armed with a kitchen knife and had been suffering from mental health issues in the preceding months.

The incident has provoked anger towards gardaí as well as significant racist abuse directed towards the family online.

Meanwhile protests against the Garda actions continued on Tuesday outside Blanchardstown Garda station where various speakers including former TD Ruth Coppinger addressed a crowd of about 70 people. The protesters have vowed to continue demonstrating outside the station a daily basis.

Mr Nkencho’s death is being investigated by the Garda Ombudsman Commission (Gsoc). Family members have yet to make a statement to investigators.

The family was due to meet a Gsoc representative on Wednesday but this meeting has been postponed.

Mr Nkencho’s body is not due to be released to the family until later this week. It is understood the family seeking a second, independent autopsy on the remains.