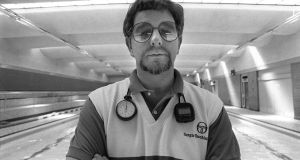 Gardaí are investigating former Olympic swimming coach George Gibney over historical allegations that he abused children who were in his care when he was coaching them.

Reports emerged this weekend that two people who were coached by Gibney had contacted gardaí with fresh allegations and were prompted to do so after hearing the Where is George Gibney? podcast published by BBC Sounds.

However, The Irish Times has learned that before those two new complainants came forward, gardaí were already investigating Gibney again over allegations dating back decades. Gibney (73) currently lives in Orlando, Florida.

Garda sources said the new complainants’ allegations had been added to the investigation that was already under way, news of which has not emerged before now.

Garda Headquarters did not make any substantive comment when asked about the two alleged victims who have only recently come forward or the Garda investigation that predated their complaints.

“An Garda Síochána is continuing an ongoing active criminal investigation,” it said, adding it was “not providing any further comment at this time”.

Sources said the two victims who had recently come forward both live abroad and made reports to gardaí separately. Both were coached by Gibney, who worked as a school teacher as well as a swimming coach, and their complaints were regarded as credible and were being treated seriously by gardaí. The Garda’s National Protective Services Unit is carrying out the investigation into Gibney.

The former national swimming coach appeared before Dún Laoghaire District Court in April 1993 to face 27 counts of indecency and carnal knowledge of children. However, the following year he successfully won a High Court judicial review which prohibited the Director of Public Prosecutions (DPP) from pressing ahead with its case against him.

His lawyers successfully argued the case on two grounds, namely the delay in the offences coming to court and a lack of precision in defining specific incidents.

Garda sources believe the DPP would be precluded from attempting to prosecute Gibney on any of the charges dropped in 1994 but that any other allegations could be pursued. These include the allegations made by the two new complainants and any complaints not among the 27 charges Gibney previously faced.

Since the 1990s, the courts in Ireland have more frequently convicted criminals, mainly child abusers, for crimes committed decades earlier with victim testimony in court now regularly the only significant evidence required to secure convictions.

After the case against him collapsed in 1994, Gibney fled Ireland, first to Scotland and then to the United States. Having moved through a number of states, Gibney now lives in Orlando.

As he never faced any criminal charges Gibney is not on the run and is not wanted at present to face charges in Ireland.

He was not named when he was before the courts in the 1990s as alleged sex offenders enjoy anonymity in order to protect the identity of their victims.

However, in 1994 sports journalist Johnny Watterson, now working for The Irish Times, published an expose into George Gibney in the Sunday Tribune. Watterson, under his editor at the time, Peter Murtagh, named Gibney for the first time, with comment from Gary O’Toole, the former top swimmer who also exposed Gibney.

They located Gibney living in a suburb of Orlando. He declined to make any comment when approached during the recording of the podcast.