Examination of house in Drogheda continues on Thursday 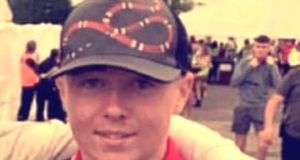 Keane Mulready-Woods who was last seen in Drogheda on Sunday. Photograph: Facebook

Gardaí have urged members of the public not to share distressing images and videos purporting to show the remains of murdered Drogheda teenager Keane Mulready-Woods.

The 17-year-old was murdered and his body dismembered in what is believed to be the latest killing in the ongoing criminal feud in the Co Louth town.

In a statement on Thursday, the Garda confirmed they were investigating reports of images and videos circulating on social messaging apps.

“These images are unverified at this time,” it said in a statement.

“They are distressing to Keane’s family and if verified are disrespectful images of the deceased and provide false support to the perpetrators of this brutal crime. Gardaí are asking people not to share this material.”

Limbs discovered in a bag in Dublin were confirmed on Wednesday as those the boy. Senior Garda officers said they were shocked by the brutality of the murder and the way the 17-year-old’s body was dismembered.

DNA testing was being carried out on a second batch of remains discovered in a burning car off Foster Terrace in Dublin’s north inner city early on Wednesday. However, gardaí believe these body parts are also those of the teenager.

The limbs found on Monday night were discovered in a black bag on Moatview Drive in Darndale.

Keane, from Beechwood Drive, Drogheda, had been missing since about 6pm on Sunday. When he was last seen alive in the vicinity of Dominic’s Bridge, Drogheda, Keane was wearing a navy Hugo Boss tracksuit, black Hugo Boss runners with brown sole and black laces, a red or orange Canada Goose jacket and a Gucci baseball cap.

One line of inquiry is that associates of Richard Carberry (39) were so irate at him being fatally shot last November in Bettystown as part of the Drogheda gang feud that they abducted, murdered and dismembered the teenager. Keane was linked to the other gang involved in the feud.

Gardaí believe he was murdered on Sunday night in a house in Drogheda which was set to undergo its third day of forensic examination on Thursday. Blood has been found in the property.

Detectives believe the teenager’s remains were left in public places by his killers to intimidate members of the rival gang.